This book was falling apart, with pages brittle and loose.  Rather than throw it in the garbage, I gave it to a Crown Center resident who is from Iran.  He's always studying dictionaries and listening to tapes, trying to learn more about the English language.  One of the hardest things, in my opinion, is grasping the idioms.  This little book has many of them, and he knows he can ask me questions.

The next day, he was trying to understand "green thumb," so I held up my thumb and tried to explain how some of us are good at growing green plants.  He then held up his thumb, with fingers curled below as I'd done, and shook his thumb at me.  "Does this mean 'green thumb' when someone does this toward me?"  Oops!  No, that means "okay" or "well done.

English is so confusing!  Other parts of this book include "Keeping Up with the Joneses" (he may not even know anyone named Jones), "The Lemon" (about a car), "The Eager Beaver" (no, it isn't an animal), "The Worrywart" (a wart?), and "The Absentminded Professor."  But those lessons will have to come later as he gets to those parts of his reading of this little book that sounds childish, but isn't. 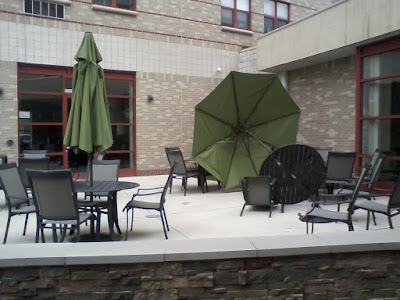 Friday night, a windstorm blew through, threatening us with tornadoes.  I saw, the next day when I opened my blinds, that one of the big green umbrellas on the patio below my windows had been blown over, table and all.  Chairs were lying askew around it.  The other umbrella had been closed and was standing intact nearby.  I took this photo later in the day, when I went downstairs to the big rummage sale held by the residents council. I tried to send the photo to my email FOUR times, and it never arrived.  I'm back to post it on Monday evening.  In the meantime, I'd left this photo of Clawdia looking down at the patio from our sixth floor window in 2015.

Donna, the library lady, has been culling older books from our limited shelves in the Crown Center's small library, making room for donations we'll be getting in early May.  I brought three of the books home with me to read before they are donated to the JCC for their next book fair.


I picked up this one for the photos of glaciers.  It's small and full of pictures, so I'll read it in a very short time.

When Madeline Was Young ~ by Jane Hamilton, 2006, fiction (Wisconsin)


I read and enjoyed her novel Prayers for Sale (2009), and this one is about Japanese internment in the United States during World War Two.

English language idioms really are difficult and don't make any sense. Poor guy as he tries to make sense of them!