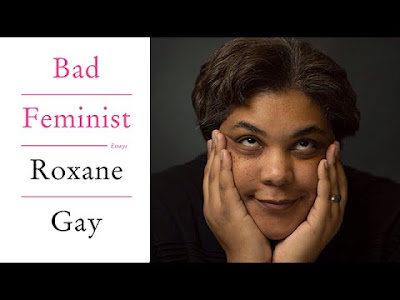 Books I'm studying with others


These essays take us through the journey of Roxane Gay's evolution as a woman of color while also taking readers on a ride through culture of the last few years and commenting on the state of feminism today.  The portrait that emerges is not only one of an incredibly insightful woman continually growing to understand herself and our society, but also one of our culture.  It's a look at the ways in which the culture we consume becomes who we are and a call-to-arms of all the ways we still need to do better.

The Third Reconstruction: How a Moral Movement Is Overcoming the Politics of Division and Fear ~ by William J. Barber II, 2016, memoir/politics


At a time when divide-and-conquer politics are exacerbating racial strife and economic inequality, Rev. Barber offers an impassioned, historically grounded argument that we are in a Third Reconstruction in America.  The  0first Reconstruction briefly flourished after Emancipation, and the second Reconstruction ushered in meaningful progress in the civil rights era.  But both were met by ferocious reactionary measures that severely curtailed, and in many cases rolled back, racial and economic progress. This Third Reconstruction is a profoundly moral awakening of justice-loving people united to reclaim the possibility of democracy — even in the face of corporate-financed extremism.


He felt Johanna tugging at his sleeve.  He looked down.
She held up one of the shotgun shells.
It was loaded with dimes.
He stared at the shell resting on Johanna's outstretched palm.
Then the Captain reached out for it even as another round smashed into the front of the stone in front of him.  He jumped but didn't duck.  He lay back and hefted the shell.  The dimes fit perfectly into the paper tube of a twenty-gauge hull.
Well, I'll be damned.
It was very heavy.  He looked at the cap.  She charged it with the powder charger.  He saw her work the thumb lever that gave out twenty grains at a time:  one, two, three, four, eighty grains of powder.  A heavy load for his old shotgun.  The Captain tossed the shell full of dimes up and down in his hand and smiled.
This is amazing, he said.  He laughed.  Ten years old and a wizard of field expedience.  (p. 113) 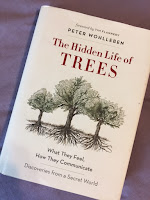 
"And what if you cut a tree down?   Is it then dead?   What about the centuries-old stump I introduced you to at the beginning of this book that is still alive today, thanks to its comrades?   Is that a tree?   And, if it isn't, then what is it?   It gets even more complicated when a new trunk grows out of an old stump.   In many woods, this happens all the time" (p. 80). 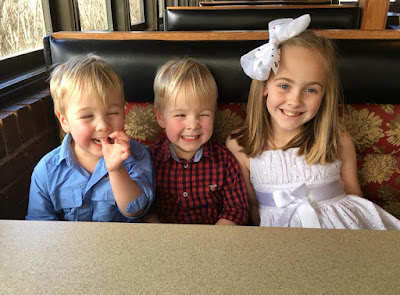 Three of my great-grandchildren earlier today

Look at those adorable faces! You must love having so many generations of your family able to spend time together!