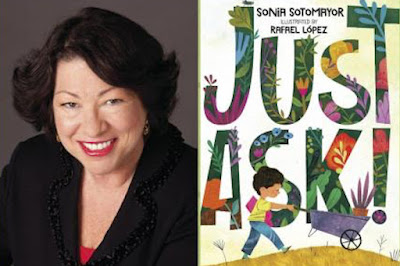 1.  Just Ask! : Be Different, Be Brave, Be You ~ by Sonia Sotomayor, illustrated by Rafael Lopez, 2019, children's picture book


Feeling different, especially as a child, can be tough.  But in the same way that different types of plants and flowers make a garden more beautiful and enjoyable, different types of people make our world more vibrant and wonderful.  Justice Sotomayor celebrates the different abilities children (and people of all ages) have.  Using her own experience as a child who was diagnosed with diabetes, Sotomayor writes about children with all sorts of challenges — and looks at the special powers they have as well.  As the children work together to build a community garden, asking questions of each other along the way, this book encourages readers to do the same.  When we come across someone who is different from us but we're not sure why, all we have to do is Just Ask.


In the United States, as in many parts of the world, people are discriminated against based on the color of their skin.  This type of skin tone bias, or colorism, is related to and distinct from discrimination on the basis of race, with which it is often conflated.  Preferential treatment of lighter skin tones over darker occurs within racial and ethnic groups, as well as between them.  While America has made progress in issues of race over the past decades, discrimination on the basis of color continues to be a constant and often unremarked part of life.

Norwood has collected the most up-to-date research on this insidious form of discrimination, including perspectives from the disciplines of history, law, sociology, and psychology.  Anchored with historical chapters that show how the influence and legacy of slavery have shaped the treatment of skin color in American society, the contributors to this volume bring to light the ways in which colorism affects us all — influencing what we wear, who we see on television, and even which child we might pick to adopt.


In almost every highly publicized case of police using deadly force and killing unarmed individuals, the person killed was an African American male.  These incidents have caused dramatic erosion in public confidence in the justice system and America's promise of equal treatment under the law.  Minority communities lack confidence in our judicial system.  To begin with, we must recognize our own biases.  We all have them.  No one is exempt.  The biggest challenge, however, is to figure out what we do once we recognize them.  For those working in the justice system — from police to prosecutors, judges, and public defenders — the consequences have broad, far-reaching, and sometimes even fatal consequences.


In the wake of the 2016 election, Lyz Lenz watched as her country and her marriage were torn apart by the competing forces of faith and politics.  A mother of two, a Christian, and a lifelong resident of middle America, Lenz was bewildered by the pain and loss around her — the empty churches and the broken hearts.  From drugstores in Sydney, Iowa, to skeet shooting in rural Illinois, to mega churches of Minneapolis, Lenz set out to discover the changing forces of faith and tradition in God's country.  She visits places of worship across the heartland and speaks to the everyday people who often struggle to keep their churches afloat and to cope in a land of instability.


When a determined girl is confronted with the culture of toxic masculinity, it's time to even the score.  Michigan Manning lives for hockey, and this is her year to shine.  That is, until she gets some crushing news:  budget cuts will keep the girls' hockey team off the ice this year.

If she wants colleges to notice her, she has to find a way to play.  Luckily, there's still one team left in town.  The boys' team isn't exactly welcoming, but she is prepared to prove herself.  Michigan plays some of the best hockey of her life, in fact, all while putting up with changing in the broom closet, constant trash talk, and pranks that always seem to target her.  But once hazing crosses the line into assault, Michigan must weigh the consequences of speaking up — even if it means putting her future on the line.

Library Loot is a weekly event co-hosted by Claire from The Captive Reader and Sharlene from Real Life Reading that encourages bloggers to share the books they’ve checked out from the library.  To see what others are reading, click this link.
____________________________

As I run across interesting titles, I put them on reserve at my library.  Sometimes all the requested books come in at the same time.  Like yesterday.  I have three not yet read from the last home delivery three weeks ago, and another five books arrived yesterday.  Can I read that many books before the next delivery?  Not likely, even though one, as you can see, is a children's book.
Posted by Bonnie Jacobs on 11/08/2019 08:30:00 AM
Labels: library loot

Lots of interesting books for you this week! I'm particularly intrigued by God Land. Living in Canada, this aspect of American culture/society is so interesting to observe and, for a country that generally feels pretty familiar, very foreign.

Enjoy Michigan and the Boys! The one about skin tone also looks really interesting.

Color Matters (the one about skin tone) and Ferguson's Fault Lines are both by Kim Norwood, whom I met when we both attended the discussion about White Fragility recently. I told her I'd like to have her come speak at the Crown Center. Since she is the Henry H. Oberschelp Professor of Law at Washington University School of Law here in St. Louis, she emailed me that she's "interested in getting together but will have to do after the holidays. Things are super packed between now and end of year. Maybe we can plan for a lunch or something first week in January?" I'm just super excited that she's willing to meet with me. That's why I want to read (or at least skim) these books before then.