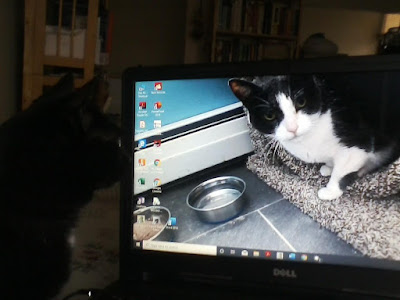 I was turning on my laptop when Clawdia decided to sit beside me.  When my desktop picture appeared, Clawdia noticed it for the first time.  I hadn't realized the photo of Barbara Land's cat Mindy, now living in Vermont, was so close to life-sized.  Even though it's a bit dark, I'm glad I captured Clawdia's confusion about that cat who suddenly appeared in our apartment.  Actually, she appeared right in front of Clawdia's face.  How odd!  She studied the other cat's eyes for what seemed like a long time, but the cat never moved.  Not even her eyes moved, and Clawdia lost interest.