Welcome to First Line Fridays, a meme hosted by Hoarding Books.  Grab a book, and share the first line. 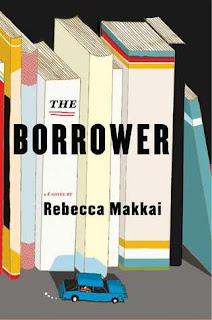 "I might be the villain of this story.  Even now, it's hard to tell."

The instructions for this meme I've just discovered says to share "the first line" of my book.  So which line is the FIRST line?  Is it the Prologue that I shared above?  Or would you say the REAL first line of a book comes in the first chapter?  Just in case I'm wrong, here's the first line from the first chapter, followed by a description of the book, shown on the right.


"Every Friday at 4:30, they gathered cross-legged on the brown shag rug, picked at its crust of mud and glitter and Elmer's glue, and leaned against the picture book shelves."


Lucy Hull, a young children's librarian in Hannibal, Missouri, finds herself both a kidnapper and kidnapped when her favorite patron, ten-year-old Ian Drake, runs away from home.  The precocious Ian is addicted to reading, but needs Lucy's help to smuggle books past his overbearing mother, who has enrolled Ian in weekly anti-gay classes with celebrity Pastor Bob.

Lucy stumbles into a moral dilemma when she finds Ian camped out in the library after hours with a knapsack of provisions and an escape plan.  Desperate to save him from Pastor Bob and the Drakes, Lucy allows herself to be hijacked by Ian.  The odd pair embarks on a crazy road trip from Missouri to Vermont, with ferrets and an inconvenient boyfriend thrown in their path.  Along the way, Lucy struggles to make peace with her Russian immigrant father and his fugitive past, and is forced to use his shady connections to escape discovery.

But is it just Ian who is running away?  Who is the man who seems to be on their tail?  And should Lucy be trying to save a boy from his own parents?

I give The Borrower an 8 of 10 rating. Here are three quotes from the book:

"In a library in Missouri that was covered with vines
Lived thousands of books in a hundred straight lines
A boy came in at half past nine
Every Saturday, rain or shine
His book selections were clan-des-tine" (p. 35).

"Speed, bonnie boat,
Like a bird on the wi-hing,
Onward! the sailors cry,
Carry the lad
That's born to be Ki-hing
Over the sea to Skye-hye-hye-hye-hye-hye!" (p. 97).

That middle one is the song I'd never heard of until January, when Helen told me about "The Skye Boat Song." I was astounded to find the song in this book. Listen to it again, here:
https://bonniesbooks.blogspot.com/2019/01/the-skye-boat-song.html