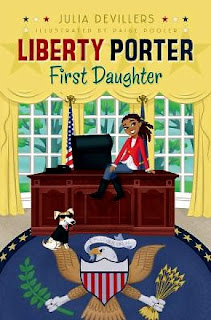 
Meet Liberty Porter.  She's a regular nine-year-old girl with a lot going on.  First of all, her dad has just started a new job.  And she has to move to a house in a new city.  Oh, and the really big thing?  Her dad?  His new job is president of the United States.  That's right.  So the house is the White House, and the city is Washington, D.C.  That means Liberty Porter is going to be First Daughter and she is super-excited!  This is the start of an amazing adventure for Liberty, for the Secret Service who follow her everywhere (ha!), and for her dog, Franklin, who makes life in the big White House more exciting — especially when he's barking at tourists.

This book was on a sale table, so not one I had planned to read.  But it was a fun book that children will like.  On the day she moved into the White House, Liberty had lots of adventures, partly because she was determined to be helpful.  She "rescued" the bored children of people who would be working for her dad — they were on a tour of the White House, led by someone who left out all the interesting tidbits that would fascinate a child.  So Liberty managed to take half of them off to her new bedroom to play.

Liberty planned to help her dad as his "secret assistant" and took her new "job" seriously.  I like this part (on page 10), just before her father's Inauguration, when he would take his oath of office.  He leaned down and looked Liberty right in the eye.


"My Liberty is about to become First Daughter," he said to her.  "You will represent the children of America.  The future of our country."

Liberty's father raised his right hand, like he was going to take an oath.  He waited.

Oh!  Liberty had to take an oath too!  She didn't know that part!  Okay!  She took a deep breath and raised her right hand too.

"I, Liberty Porter, promise to be an awesome First Daughter.  I will represent the children of America, who are the future of our country!" Liberty promised.

Then her father laughed and said, "I was just raising my hand to give you a high five."  Her job, he explained, was "to just be a nine-year-old."  But like the posters in the crowd said, Liberty wanted to be a "Porter SupPorter!"