Beginning ~ with dying to the world

The beginning is a bit long, so read only the first sentence, if you prefer.  It took this much for me to decide I would actually read the book.


That glorious day when my classmates and I received Holy Orderes was the beginning of my servitude in the rectory of Monsignor McQuade and his sister, Elizabeth.  If somebody's Uncle Louie hadn't been flooding the cathedral sanctuary with the lights of his home movie camera, the ordination ceremony would have been something right out of the Middle Ages.  Bishop McGivney sat on a throne before the high altar and watrched us process up the aisle carrying lighted candles.  When we were all standing in front of the main altar, Monsignor McFee, the cathedral rector, gave us the call to orders.
"Theodorus Patricius Kelly."
"Ad sum."
"Angelo Thomas Procella."
"Ad sum."
"Robertus Paulus Regalo."
"Ad sum — Here I am," I answered and blew out my candle, symbolic of my dying to the world.
When the rest of my classmates had received the call and answered, the Bishop turned to the seminary rector, who was standing on the sidelines, and said to him in Latin, "Monsignor?  Do you know them to be worthy?"
The rector read off a long Latin paragraph which stated that as far as human knowledge would allow him to know, we were worthy.
We had made it.  Six years of chasing bells and studying had put us on the top of the world.  With over a thousand proud relatives staring at us from the pews, we were high and happy. 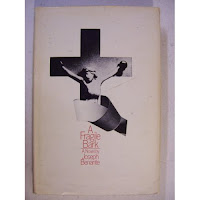 
Summary:  For Father Robert Regalo, the first church assignment after ordination is not at all what the idealistic young priest could have expected.  Father Robert is one of the new breed of church fathers:  hip, skeptical, and concerned more with the everyday reaalities of the human condition than with the rituals of the formal church.  Yet he finds himself in the middle of an ecclesiastic Catch-22, struggling to keep his sanity while coping with the rules and regulations of the rectory, the bingo games, and the raffles.  The book reveals the serious problems and irrelevancies of serious problems and irrelevancies of organized religion today.

It's off to a slow start, and this may not sound the least bit interesting to most of you, but — having bought this book in 1987 just before my own graduation from seminary, just before I was appointed to my own first church — I was curious about the experiences of a newly minted Catholic father.  The book was written over 40 years ago, long before the Catholic Church's pedophile priests were exposed.  I'll also read this with the upcoming retirement of Pope Benedict XVI in mind.  This book has moved with me from place to place for over a quarter of a century, still unread even after I retired from ministry.  I think it's about time I either read it or gave it away.