Mary, the mother of Jesus 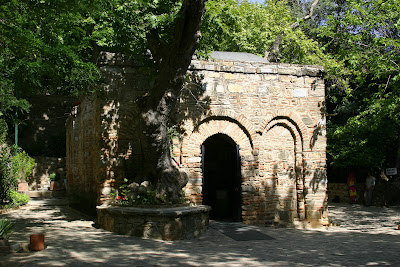 This is the House of the Virgin Mary in Ephesus, an ancient town on what is now the western edge of Turkey.  Before reading this book, I did a quick search for information about Ephesus and found this.


A legend, which was first mentioned by Epiphanius of Salamis in the 4th century AD, purported that Mary may have spent the last years of her life in Ephesus.  The Ephesians derived the argument from John's presence in the city, and Jesus’ instructions to John to take care of Mary after his death.  Epiphanius, however, was keen to point out that, while the Bible says John was leaving for Asia, it specifically does not say that Mary went with him.  He later stated that she was buried in Jerusalem.  Since the 19th century, The House of the Virgin Mary, about 7 km (4 mi) from Selçuk, is purported to have been the last home of Mary, mother of Jesus in the Roman Catholic tradition.


Colm Tóibín’s portrait of Mary presents her as a solitary older woman still seeking to understand the events that become the narrative of the New Testament and the foundation of Christianity.  In the ancient town of Ephesus, Mary lives alone, years after her son’s crucifixion.  She has no interest in collaborating with the authors of the Gospel.  They are her keepers, providing her with food and shelter and visiting her regularly.  She does not agree that her son is the Son of God; nor that his death was “worth it”; nor that the “group of misfits he gathered around him, men who "could not look a woman in the eye,” were holy disciples.  Mary judges herself ruthlessly (she did not stay at the foot of the Cross until her son died — she fled, to save herself), and her judgment of others is equally harsh.  This woman whom we know from centuries of paintings and scripture as the docile, loving, silent, long-suffering, obedient, worshipful mother of Christ becomes a tragic heroine with the relentless eloquence of Electra or Medea or Antigone.  Tóibín’s tour de force of imagination and language is a portrait so vivid and convincing that our image of Mary will be forever transformed.

This portrait of Mary, the mother of Jesus, is different. It's unlike anything I've ever read about her, and I'm sure I'll be thinking about it for days.  Ephesus is the town where Artemis was worshiped.  The statue of that goddess showed her with many breasts.  In the book, Mary went to the Temple of Artemis.  Interesting, but it seems unlikely to me.  I rate the book 8 of 10, a very good book.
Posted by Bonnie Jacobs on 1/31/2013 12:01:00 AM
Labels: book review

I was there when I traveled though Turkey. Beautiful ruins.

Wow, Madge, how interesting to know someone who was actually there.