Beginning ~ with a temper tantrum 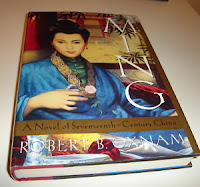 Ming: A Novel of Seventeenth-Century China ~ by Robert B. Oxnam, 1994, fiction (China)

I've had this book on my shelf for several years, and — if my bookmark is any indication — at some point I have already read (and forgotten) the first two chapters.  I know already, from that same first page, that the speaker of these words is a boy named Longyan.  His mother was amused, but tried "to maintain her stern demeanor."


How could you punish a three-year-old, looking so impish in his underwear, a tiny rascal who charmed all the ladies in the red chamber?  Besides, time was too short for a real scolding.  She had less than ten minutes to make Longyan polite and presentable.

I think it's time for me to find out what's going on here.

Yes, sometimes it is hard to be stern when they're being so cute and funny in their naughtiness....

LOL I start a lot of books and set them aside, myself.