Something good came of it

My son's truck died and — just when he needed it most — so did his cell phone.  With today's technology, our cell phones are now also our phonebooks, our address books, our notepads.  Everything's in the one little electronic device.  So when he borrowed a phone to call his wife, he was in big trouble when she didn't answer.  Thinking maybe she was asleep (she was actually in the shower), he called his sister to run over to his house to tell his wife to come get him.  Nobody answered at his sister's house, either.  The next number that came to his mind was mine.

He knew I'd be home, since I'm laid up with a broken shoulder.  I called his other sister for him — my daughters are identical twins and both live near their brother.  Mission accomplished!  While his wife went to rescue him, I had time to dream up the perfect solution to his problem. 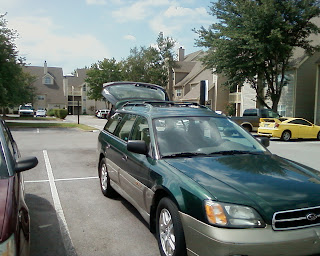 I won't be able to drive for weeks — until my shattered shoulder heals — and my car will need to be driven occasionally by someone.  Two birds with one stone, in other words.  So half an hour ago, my Subaru Outback went home with David and Sharon.
Posted by Bonnie Jacobs on 12/16/2012 07:00:00 PM
Labels: David, family

Like when it all works out. Hope you are feeling better.

That is so great that your car will get used and he has a vehicle to borrow. Very convenient for both of you!