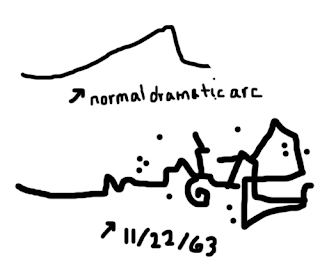 Would you believe it comes close to being my review of Stephen King's latest novel?  When 11/22/63 was published in November 2011, I found "A brief history of time travel literature" which describes the book like this: 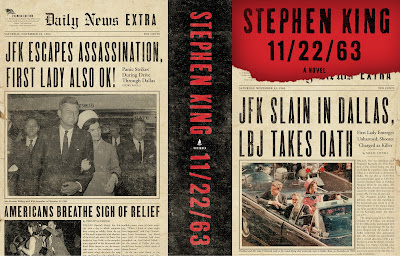 An example of an alternate history style time travel novel, thirty-five-year-old high-school English teacher Jake Epping is leading an ordinary life when his friend Al, who runs the local diner, reveals that his storeroom is a portal to 1958 and sets Jake on a mission to prevent the JFK assassination.

The article divides time travel literature into five ways people got to the past or future — I added number six, based on my favorite time travel book.
I found a couple of other reviewers who agree with me on King's "irritating writerly habits."


Rob:  "He’s still aggravatingly windy, still repetitious in a way that I always found insulting; phrases that he repeats and repeats and repeats, over and over and over until you want to hunt him down and beat him to death with his own hardback — which is entirely possible with this damn brick of a book. Go ahead, drop it on your socked foot. I double dog dare you."

Overall, I think the book was too long and needed to be tightened up.


Susie:  "Pacing. There was a whole lotta boring going on in this book. Not to say that the book itself, in its entirety, was boring, but there was a lot of extraneous action that either dragged out longer than it needed, or it didn’t need to be in there in the first place. Some of these scenes didn’t give us any kind of payoff as far as creating suspense in their own right; I would have been happier if the more perfunctory scenes happened 'off-camera.' ... There was also a whole construct that actually created more predictability, 'harmonics.'  Harmonics allowed not just me but also Jake Epping to predict the future. Boring, boring, boring."

By the way, that's Susie's drawing at the top of this post — one commenter said it "looks like a 3-year-old’s drawing of the Loch Ness Monster eating a bunch of people."  (Looks more like Nessie is eating a bunch of loose grapes to me.) 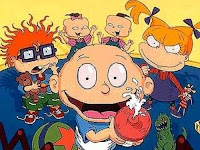 Another annoyance — I didn't mark the page (and in this long book, I'd never find it again) — King had someone in the 1960s say something about a "rugrat," meaning a small child.  He or she may have been referring to Junie Oswald, but I'm not sure.  The term rugrats didn't appear until decades later, maybe when the "Rugrats" cartoon premiered in 1991.  That sort of thing was jarring for me, since I remember the 1950s and 1960s.  I was there!  Okay, maybe Stephen King couldn't cross-check everything, but that out-of-place stuff happened too often.  Still, the book was a good enough to keep me turning the pages.


I want to thank one other person:  the late Jack Finney, who was one of America's great fantasists and storytellers. ... he wrote Time and Again, which is, in this writer's humble opinion, the great time-travel story.  Originally I meant to dedicate this book to him, but in June of last year, a lovely little granddaughter arrived in our family, so Zelda gets the nod.  Jack, I'm sure you'd understand.


1.  If you could go back in time and change history, would you do it?  If so, which part of history?

2.  What do you think about the ethics of using "future" knowledge to make money in the past?

3.  Al and Jake are nervous about triggering Ray Bradbury’s butterfly effect, when they go back in time.  (Click the link to read my post about that.)  Do you think changing something in the past would change the future?

That's funny that you rated it a 9 since it sounds like it's REALLY long and got on your nerves a bit. But the concept is so interesting!

I don't think I'd change history. What if that means I (or someone who has had a great positive impact on life) turned out not to exist due to the change?

Helen, I rated it a 9 because it's a good story, even if I do think he could have made it better. I really enjoy reading about time travel and am now in the middle of Kindred by Octavia Butler, where a modern black woman is drawn back to the antebellum South.

I loved this book a lot, that being said, no I wouldn't want to go back and change history or anything about my life...the good or the bad.

"I didn't mark the page (and in this long book, I'd never find it again)" Bonnie - if you had a Kindle, you could just search for a word or phrase in your book and be taken there immediately!

Thanks for the questions, fun!

Thanks for linking up your review on the Chunkster blog! I hope you'll stop by and join the discussion - questions are up now!

So when I started following your links, I just found more similarities. Here is my earlier blog post on 11/22/63 wherein I explore the Butterfly Effect. Weird! https://sadiebellereads.blogspot.com/search?q=butterfly+effect

Thanks for leading me to this blog post. I'd add a #7. Daphne du Maurier had a person time travel after taking drugs. I think the book was The House on the Strand. I found her method unconvincing. I was also not a big fan of 11/22/63. I think my favorite of Finney's work is his short stories, although I did love Time After Time.