Spong and the non-religious world

I went to Grace Episcopal Church yesterday to hear Bishop John Shelby Spong, a world-renowned biblical scholar and theologian.  Spong urges Christians to grow up and take the Bible seriously — but not literally.  He spoke at morning and afternoon sessions, with lots of time allowed for questions and answers.  After the reception and book signing, I came home with these two books. 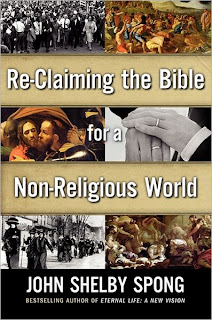 Re-Claiming the Bible for a Non-Religious World ~ by John Shelby Spong, 2011, religion, 432 pages


For two hundred years, scholars have been analyzing the Bible and overturning much of what we once thought we knew.  Everyday Christians, however, are not privy to this deeper conversation.  This book is designed to take readers into the contemporary academic debate about the Bible.  Read what he says about the book's publication last week.
"One does not," he asserts, "have to twist one's brain into a first-century pretzel in order to take the Bible seriously in this increasingly non-religious world." 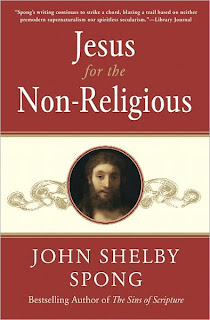 Jesus for the Non-Religious ~ by John Shelby Spong, 2007, religion


Writing from his prison cell in Nazi Germany in 1945 Dietrich Bonhoeffer, a young German theologian, sketched a vision of what he called "Religionless Christianity."  In this book, John Shelby Spong puts flesh onto the bare bones of Bonhoeffer's radical thought.  The result is a strikingly new and different portrait of Jesus of Nazareth, a Jesus for the non-religious.

Spong challenges much of the traditional understanding, from the tale of Jesus' miraculous birth to the account of his cosmic ascension into the sky.  He questions the historicity of the ideas that Jesus was born in Bethlehem, that he had twelve disciples, or that the miracle stories were ever meant to be descriptions of supernatural events.  He also speaks directly to those critics of Christianity who call God a "delusion" and who describe how Christianity has become evil and destructive.  Spong proposes a new way of understanding the divinity of Christ as the ultimate dimension of a fulfilled humanity.

My question for both books:  Does the non-religious world care about either the Bible or about Jesus?  Is there any reason they should?  In his November 10th column, Spong says:


"I still believe that Christianity can engage the modern mind in significant dialogue if we dare to take the biblical and theological knowledge that is currently available seriously.  I believe that we ought not to seek to dodge, but to address the questions that impinge upon us daily from the world of knowledge.  I have seen this engagement bear fruit when it has been practiced.  I believe it can happen world-wide."

I appreciate what Spong is doing. Speaking from the non religious, non god believing side - the Bible is a book and Jesus is a figure of history.

I don't place much value on the Bible beyond its place in history and as a piece of literature. I am far more concerned that whatever group/religion we belong to, that we are doing good and being helpful to one another, the rest is merely dressing.