I've found some more good books that show girls doing adventurous things, like the children's books I wrote about recently. 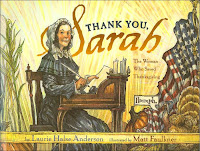 Thank You, Sarah: The Woman Who Saved Thanksgiving (2002) is by one of my favorite writers -- Laurie Halse Anderson.  This one, for ages 5-10, is such fun to read!  People were forgetting Thanksgiving and, pretty much the only folks celebrating were in the New England states.  We needed a hero, according to the book, which showed action hero types on the next page.  "No, not like that."  So the three guys, ready to be heroes, are looking across the double spread to the "little lady" on the right-hand page.  The hero we needed was Sarah Hale, a writer and editor who started sending letters to presidents -- like Taylor, Filmore, and Pierce -- asking that Thanksgiving be made a national holiday.  They had other things on their minds and weren't interested.  Eventually, President Abraham Lincoln agreed to do as she asked.  I thought it was just as interesting to learn that Sarah Hale also wrote "Mary Had a Little Lamb."  Rated 10 of 10 because it was such fun to read. 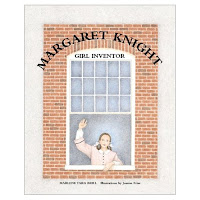 Margaret Knight: Girl Inventor by Marlene Targ Brill (2001) is also about a real person.  This book, for ages 5-8, shows how Mattie (that's her nickname) developed her first invention, a stop-motion device to make looms safer for workers in the cotton mills.  Most people thought girls weren't interested in tools and making things, but she was.  And she came up with a simple idea that no one had thought of before -- to make the loom come to a stop when a thread broke, so the parts didn't strike the workers and injure them.  I love the pictures by Joanne Friar, like this one of Mattie figuring out how the loom worked and how it could be changed to work better without hurting the people (often children) who ran the looms.  Margaret Knight went on to develop a way to fold the flat-bottomed sacks still used in grocery stores today.  Rated 9 of 10. 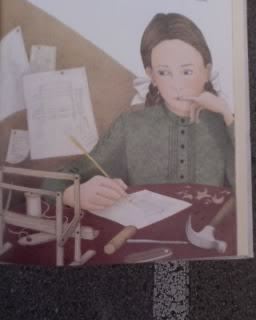 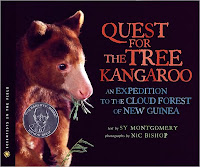 Quest for the Tree Kangaroo: An Expedition to the Cloud Forest of New Guinea (2006) was written by a spunky woman named Sy Montgomery. In an exclusive interview on Barnes & Noble online, Sy gives us some insight into her early interest in protecting living things. She calls this her first known act of eco-conscience:


"I was sent home from kindergarten for biting a little boy who had pulled the legs off a daddy longlegs. I would do it again today."

In this book for young adults, Sy  accompanies women and men on an expedition to Papua New Guinea's cloud forest (no, not a rain forest -- it's a cloud forest) to learn more about Matschie's tree kangaroos.  I know you are wondering what a kangaroo is doing up a tree.  As you can see from the book's cover, it looks kind of like a lovable teddy bear, but it isn’t a bear or a monkey, though it climbs trees as easily as a monkey. It has a pouch like a kangaroo and lives high up in the canopy of ancient trees.  The scientists who track these elusive animals were led by a woman named Lisa, giving little girls a role model for going into a scientific field as Sy and Nic (the photographer) record what the scientists do when they find the animals.  His photos are a lot like those used in National Geographic, making it a nice book to own.  Rated 8 of 10.
Posted by Bonnie Jacobs on 2/16/2010 10:42:00 PM
Labels: book review, Laurie Halse Anderson, women unbound

I forgot to tell you it took Sarah Hale 38 years of letter writing to accomplish her goal. That's a lot of writing!

Thank You, Sarah is so, so fun! Such a great book.