How to throw a party for your elders 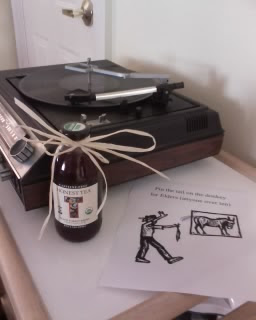 Birthday parties should be age-appropriate, even when you have an honoree who is nearing 70 but labors under the impression that she started over because last year's heart surgery gave her new life and vitality she hasn't felt in decades.  A party that makes her feel young again is just the ticket, or as an earlier generation would say, such a party would be the cat's meow!  You could even call it a re-birthday party, just to make her happy.  Maybe even light a single candle on the cake when you sing happy birthday to her -- or happy re-birthday, as the case may be.  (One candle is better than 70, because you'd never get all 70 lit before the first ones sputter out in a puddle in the cake's frosting.)
Have music for the party.  Find some of her vinyl records and an old player on which records can be played.  (If you are too young to know what I'm talking about, google "record player," but the old folks know all about these things.  For your edification, that's a picture of a record player above, with a record already on the spindle.  Don't know what a spindle is?  Oh, never mind.)  Assign one of the youngsters in the group, maybe only in her 40s or 50s, to choose from the old albums and dance to the music, while the rest of us (I mean, the rest of the partyers) watch and smile and cheer her on.
Next, gifts.  Because the honoree will have collected "stuff" for many decades, she doesn't need more.  However, if you are feeling creative, here's an idea.  If you know or suspect that she takes a medication that warns "Do not drink alcoholic beverages while taking this medicine," do something cute like getting her favorite tea and festooning the bottle the way you would do with a fine wine (see photo above).  You can have even more fun and laughter if you get a tea, like the brand shown, that has a saying under the cap.  Unscrewing the cap on the bottle shown produced this:


"Those who get too big for their britches will be exposed in the end." -- Unknown 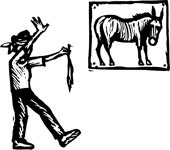 Enlarge this drawing (or a similar one), make a copy for each person attending, and be sure to have enough pens, pencils, or crayons for everyone. The assignment is easy -- DRAW a tail on the donkey. Because elders have earned the right to skip pesky rules, they can draw the tail on the donkey with eyes wide open.  Two of us at my party yesterday drew the tail as in the photo at the top, rather than hanging straight down as the one in the child's hand here.  I didn't grow up on a farm and didn't realize that, when a donkey or horse raises its tail the way I drew it, everyone should get out of the way!

I was excited to see the record player! Here's something that will date me: when I was in 8th grade we played "kiss John Travolta" instead of pin the tail on the donkey. Yes, it was 1978 and Saturday Night Fever was all the rage!

Hahahaha, what was under the lid of the tea! Not the honorable bit of wisdom I expected!

Speaking of the music, Donna told me something I missed. The very first song Emily played was Carole King's "You've Got a Friend" from the TAPESTRY album. Given the reason for our party, that was a PERFECT choice. I'm listening to that song as I type this comment. Yep, perfect music to celebrate friendship. "Ain't it good to know that you've got a friend?"