Thursday, I met yet another author 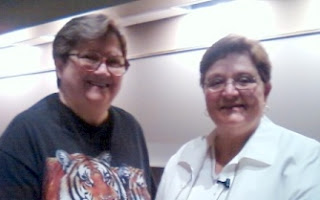 I'm on a roll, here! I met a novelist ten days ago, a theologian a week ago, and a historian day before yesterday.

Theda Perdue, a professor of history at the University of North Carolina at Chapel Hill, spoke at UTC (University of Tennessee at Chattanooga) on Thursday evening. One of my face-to-face book clubs chooses a theme for each month, rather than each of us reading the same book, and for April we had chosen "local Native Americans." The "coincidences" mounted when we learned that Dr. Perdue would be speaking at UTC:

1. Her subject was the Cherokees, and "local Native Americans" was the theme we had chosen for April.
2. The book mentioned in the announcement was Cherokee Women: Gender and Culture Change, 1700-1835, which "just happened" to be the book I had chosen to read.
3. She would be speaking on Thursday, April 17th, the same evening we were scheduled to meet.

Obviously, we were supposed to be there, right? We met at the university to hear her lecture, I got my book signed (plus photos with her), and we re-convened at the Stone Cup across the river for our discussion that followed. I was especially interested in the many photos Perdue used during her lecture, along with comments from some of her Indian friends from Cherokee, North Carolina, who had come to town for her presentation (and who were sitting directly in front of me).

I had read Perdue's recent book The Cherokee Nation and the Trail of Tears as well as Cherokee Women, which three of us had ordered. (I'll review both of these books soon, but for now you are welcome to see quotes and notes from my online reading journal by clicking on the titles.)

We sat outside on the restaurant's deck overlooking the Tennessee River, within sight of the John Ross Bridge, and discussed John Ross, chief of the Cherokee Nation at the time of their removal from here to Oklahoma. When I say "here," I mean Chattanooga, originally known as Ross's Landing. Of the 17,000 Cherokees who left on the Trail of Tears, at least 4,000 died. Why? So "we" whites could have their land, on which, incidentally, gold had recently been discovered. Our Alternative Book Club had a very lively couple of hours, as we talked about ethnic cleansing, stomp dancing, and the reconciliation involved in the annual Green Corn Ceremony.
Posted by Bonnie Jacobs on 4/19/2008 11:22:00 PM
Labels: author, books

What an interesting life you lead...and what a wonderful place to lead it! Nothing sounds more delicious to me than to be among friends at a scenic cafe having good conversation.

I've not read either of the cited books, but certainly know the subject from other sources. It wasn't our best moment, that's for sure! Did you know and/or did she speak of the Jews that were evicted at the same time? Seeing as how I love to read historical books, I might just have to pick this one up.

What, is there a writer's convention going on there? You've been busy, Bonnie!

This is the only one who was in Chattanooga. I met the novelist in Kingsport, Tennessee, and the theologian in Pleasant Hill, about ten miles on the "other" side of Crossville, Tennessee.