Saturday, I met another author 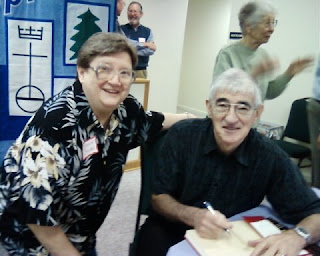 John Dominic Crossan is a theologian, so he may not be as familiar to some of you as a (say) a novelist. But he's one of the luminaries in my reading world, along with Marcus Borg, with whom he is writing a series of books. I met Borg in March 2006 when he lectured in Chattanooga on The Heart of Christianity, and I met Crossan on Saturday when he lectured on empires and the moral and ethical call to oppose unjust superpowers, whether they are Babylon, Rome, or even America. Crossan's book God & Empire came out in paperback in February.

The first-century Pax Romana, Crossan points out, was in fact a "peace" won through violent military action. Jesus preached a different kind of peace — a peace that surpasses all understanding — and a kingdom not of Caesar but of God. Crossan says peace cannot be won the Roman way, through military victory, but only through justice and fair and equal treatment of all people.
Posted by Bonnie Jacobs on 4/14/2008 03:19:00 PM
Labels: author, books

Love the picture!! How nice for you!

Bonnie,
You are really on a roll, and you really look happy. I miss you all.