Thirteen things on my mind ~ including books 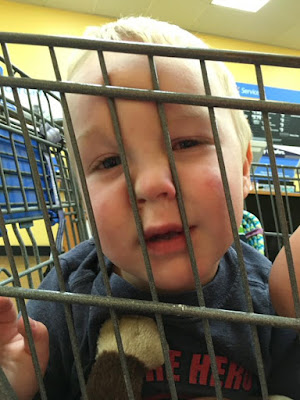 1.  My great-grandson Jonathan and his family were stranded at a Walmart when their car broke down three hours from home, as they returned from a great vacation.

2.  Here's some humor from Facebook that seems to apply to my life right now: 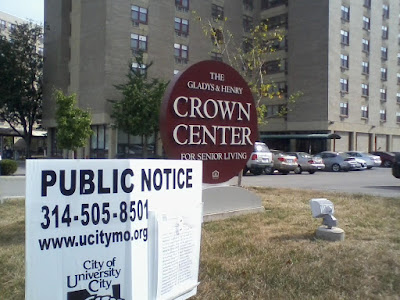 3.  Changes are coming to the Crown Center, as this notice of a public hearing attests.  I plan to attend tomorrow's meeting. 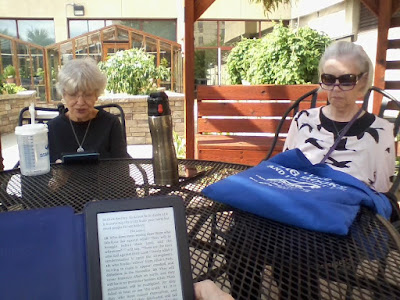 4.  Someone was in the Art Room Saturday afternoon, so Donna and Alyssa and I went outside to read out loud together in the gazebo.

5.  Our DASH group is still getting together to exercise.  Here's Barbara holding one-pound weights.  We meet in the Crown Center's fitness center.

6.  Colleen's recent Thirteen post started with a joke:  "When Donald Trump looks at a half-filled glass of water, he doesn’t see it half-full or half-empty, he sees his own reflection." 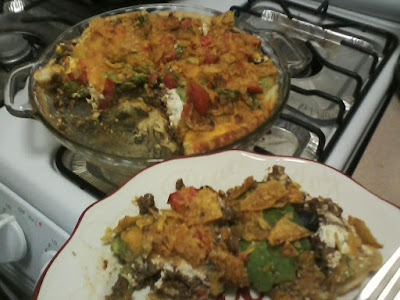 7.  Donna made us another Taco Pie, but this time she used tortilla chips instead of Fritos.

8.  The Smithsonian Magazine recently had an article about a corduroy road, with logs as the roadbed.  The "W Road" up Signal Mountain near where I raised my children began as a corduroy road.  The road got its name because the three switchbacks formed a "W" as it traversed the steep palisade.  This is a photo from 1914, long after the roadbed of logs had disappeared. 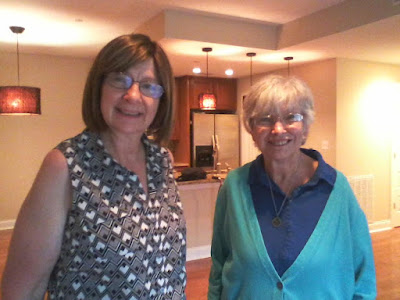 9.  My friend Jane will be moving into her new apartment soon.  She showed it to Donna and me on a recent Saturday.  Oh, by the way, Jane is Donna's sister. 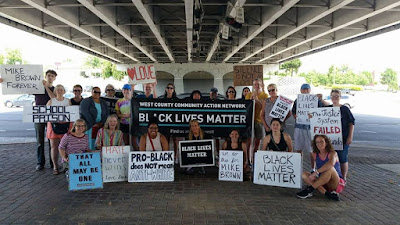 10.  This week marked 3 years since Mike Brown was killed, sparking the Ferguson Uprising, so the West County Community Action Network (WE CAN) honored his life at Saturday's Black Lives Matter vigil with 4.5 minutes of silence.  Next Saturday, they will be in Creve Coeur from 11:30 to 12:30, atop the 270-Olive overpass, South side, to uphold the message that Black Lives Matter.  My friend Joy is in this group, and I met several others at lunch after the vigil.

11.  After the recent storm of violence in Charlottesville, Virginia, I posted a video on Facebook from the Rev. Traci Blackmon who was among the people inside the church.  That prompted me to tell people about Traci's book:  White Privilege: Let's Talk ~ A Resource for Transformational Dialogue ~ by Traci Blackmon, John Dorhauer, Da Vita McCallister, John Paddock, and Stephen G. Ray (2016).  This resource is only 99-cents for Kindle, and facilitator's resources are available free from the publisher. 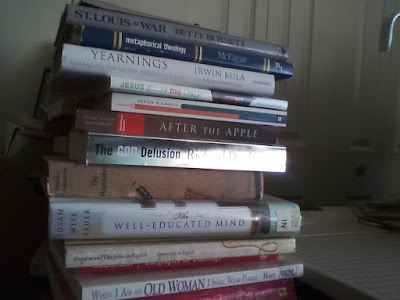 12.  The book I was reading earlier in the day had referred to a book by Richard Dawkins.  When I sat down in my recliner in the late afternoon, I noticed the sun was reflecting off the windows of the other Crown Center building through my window onto a stack of books I'd put there many days earlier.  Do you see which book was "calling me"?  Yep, it's highlighted:  The God Delusion by Richard Dawkins (2006).  After taking this quick photo, I sat back down and glanced again at the stack.  The sun had moved and was no longer shining on the stack, much less that particular book.  How funny! 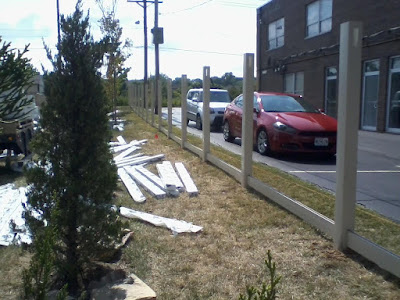 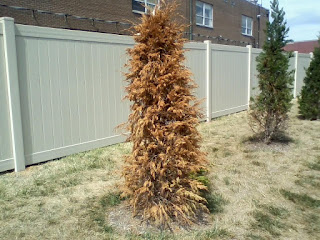 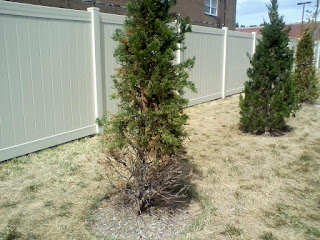 Now you may be wondering why I'm calling these "burnt" trees.  As I was parking in a spot facing these trees a year or two ago, I saw the "burnt tree" burning.  Literally burning, with flames.  I reported it to the office.  A few days later, I saw a worker from the building (which is now BEYOND the fence) flick a cigarette to the base of that partially burnt tree.  Aha!  Now I knew why the trees were burning.  My first thought when I saw the new fence going up was that now we wouldn't have any more burnt trees on our side of the fence.
Posted by Bonnie Jacobs on 8/18/2017 10:00:00 PM No comments: Links to this post
Labels: Barbara L., Crown Center, DASH diet, Donna, family, Jane, Jonathan

Another bagful of books 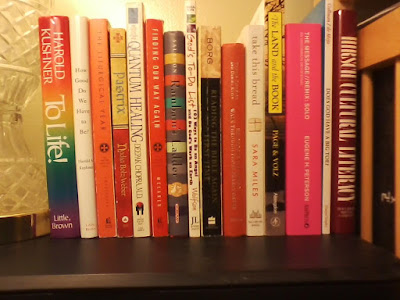 I wrote about two bags full of books from the JCC used book sale in 2015 and about one very, very full bag of books from their sale in February.  I've done it again.  May I blame Marilyn?  She asked for a ride to the JCC because this is the last day, when we get a whole bagful of books for a flat $5.  We took Donna along with us and, honestly, didn't stay long.  And still I came home with these 15  books.

I guess it's obvious I browsed only among the books in the section on philosophy, religion, theology, and psychology, right?  Among those books was one entitled Talking God by Tony Hillerman (1989).  Having worked in a library and owned a bookstore, I recognized it as fiction:

Tony Hillerman is a novelist, not a theologian.  I moved their book to the correct table.
Posted by Bonnie Jacobs on 8/17/2017 10:30:00 PM No comments: Links to this post
Labels: JCC used book sale 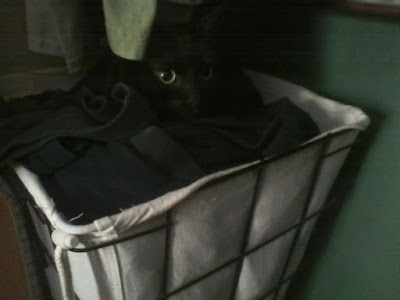 Guess who was sleeping on top of the dirty clothes in my hamper?  The closet door was open (as usual), and I noticed a tiny spot of yellow pivot to LOOK at me as I reached for a shirt hanging above the hamper.  Would you have spotted my black cat on top of the navy blue?  I almost didn't, until she looked up at me.  She is totally hidden . in . plain . sight!  She seemed to think she was in trouble, so I said, "Good girl!"  I hope she was comfy.  When I left to go to my exercise class, Clawdia was still there.  Now I wonder if that's where she's been "hidden" when I've searched for her unsuccessfully on occasion.  Hmm.
Posted by Bonnie Jacobs on 8/09/2017 02:54:00 PM 1 comment: Links to this post
Labels: Clawdia 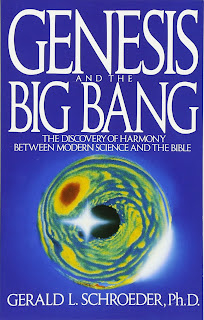 Genesis and the Big Bang: The Discovery of Harmony Between Modern Science and the Bible ~ by Gerald L. Schroeder, 1990, religion/science


In this groundbreaking book, physicist Gerald Schroeder takes on skeptics from both sides of the cosmological debate, arguing that science and the Bible are not at odds concerning the origin of the universe. 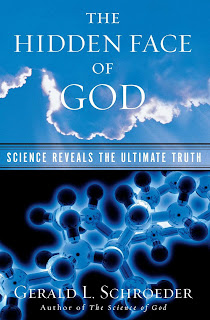 The Hidden Face of God: How Science Reveals the Ultimate Truth ~ by Gerald L. Schroeder, 2001, religion/science


In a timely fusion of science and faith, the scientist and popular writer Gerald L. Schroeder explains why cutting-edge scientific theories point to a great plan underlying the universe.

A couple of weeks ago, I told you about getting this book from the library:


The Science of God: The Convergence of Scientific and Biblical Wisdom ~ by Gerald L. Schroeder, 1997, religion/science

The top two books were already on my own bookshelves.  I bought and read Genesis and the Big Bang in the first week of February 1992.  I bought The Hidden Face of God in December 2001, but haven't read it yet.  I'm finally reading The Science of God (yes, the one from the library), and yes, they are all by the same author.

As I was writing this blog post, I skimmed some of the passages I had underlined in Genesis and the Big Bang and noticed that (1) each underlined part still interests me and (2) I didn't specifically remember having underlined it.  I usually remember whole passages for a long time, usually years.  That's when I looked back to see when I'd read the book.  What?!?  It's been 25 years?!?  (From 1992 to 2017.)  No wonder I didn't remember each quote!

Isn't time interesting?  I had underlined a couple of places about "the great supernova of February 1987" (pp. 79 and 83), which had occurred five years before I read that book.  What was I doing at THAT time?  It was my last semester of seminary, and I was appointed as pastor of my first church a few months later.

Chapter 2 is about "Stretching Time," so I looked there to find a suitable quote for this post.  I chose this one from page 45 about the fact that "gravity ... causes time dilation":


"A clock on the Moon runs more rapidly than the same clock when on the Earth because the Moon has less gravity than the Earth."