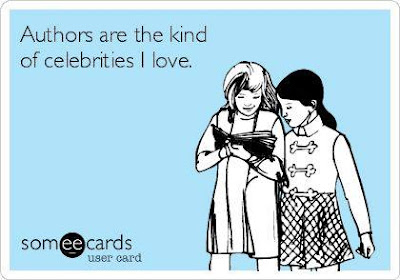 I don't understand the urge to follow people who haven't accomplished anything, but are famous because they are well-known, and who are well-know because we talk about them.  And we celebrate that?  Why?  I'm a reader, so "authors are the kind of celebrities I love."  And then only when they have written something that interests me.  Back in 2010, I wrote about a few authors I have met: 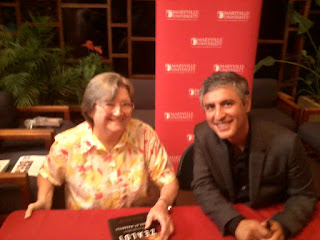 Since moving to St. Louis, I've also met Reza Aslan, as you can see in this photo.  That day, he signed my copy of his book  Zealot: The Life and Times of Jesus of Nazareth (2013) that had just been published.

Today, I'm also pondering an event that happened a year and a half before I was born.  My parents were married on October 16, 1938.  My dad had turned 20 exactly one week earlier, and my mom was still 20 until exactly one week later.  That was important to him, that they were the same age, that she was not a year older.  Next Monday, I'll be thinking about her birthday, a century after it occurred.
Posted by Bonnie Jacobs on 10/16/2017 11:11:00 AM
Labels: authors, Monday Mindfulness