Beguinages ~ word for this Wednesday 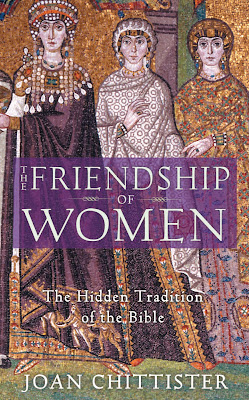 The Friendship of Women: The Hidden Tradition of the Bible ~ by Joan Chittister, 2006, religion, 8/10


Looking deeply into biblical stories of female friendships in order to extract greater truths, this compelling work explores the sacred dimension of friendship through the lenses of faith, tradition, and scripture, revealing the often overlooked voices and experiences of women in the Old and New Testaments.  Recovering and reclaiming the witness and wisdom of such women as Lydia, Prisca, Phoebe, Martha, Deborah, Esther, Rachel, Ruth, Veronica, Elizabeth, Anne, and Mary Magdalene, and drawing a highly inspiring message from each of these women's lives, the book embraces friendship as it is embodied by women, between God and all of creation, and between all human beings.

It's rare for me to run across a word in my reading that is completely new to me.  Sister Joan Chittister, a Benedictine nun, gave me a new one in this book:


"By 1984, social scientists were suggesting that friendships between women actually maintain marital structures by enabling the women to create personal space and autonomy within the family arena, and historians were now studying the woman-to-woman bond that had created convents, mobilized women's social resistance groups, sustained women in harems, and built Beguinages in Europe" (p. 24).

Beguinages.  She didn't explain it in any way, apparently assuming most of her readers would recognize the word.  I didn't.  So I read what Wikipedia said about beguinages.  Here's a summary of what I learned:

A beguinage (French – béguinage) is an architectural complex which was created to house beguines:  lay religious women who lived in community without taking vows or retiring from the world.  In the early thirteenth century, larger communities emerged in the region of the Low Countries, with several houses for beguines built around a central chapel or church where their religious activities took place.  These often included functional buildings such as a brewery, a bakery, a hospital, and farm buildings.  They were encircled by walls and separated from the town proper by several gates which were closed at night.  During the day the beguines could come and go as they pleased.  From the twelfth century through the eighteenth, every city and large town in the Low Countries had at least one court beguinage, but the communities dwindled and came to an end over the course of the nineteenth and twentieth centuries.

That reminds me of the place where I live.  Though we have a few men at the Crown Center, most of us are women.  We can come and go as we please, since we are a retirement center, but the doors are locked at night.  We have someone on duty who can let us back in, and we also can get fobs that electronically open the door for us after 9:00pm.  Like the beguines of that time, we have areas of our high-rise buildings with other functions:  an exercise room, an art room, a theater room, a library, a dining hall, a café open from 8:00am to 2:00pm, laundry rooms, meeting rooms (large and small), a computer room, a culinary kitchen for demonstrations, and so forth.  But we residents have our own separate apartments.  Although the Crown Center was established and is run by the Jewish community, residents are not limited to one religion.  It's a very diverse place.

So, I learned a new word.  My favorite passage from The Friendship of Women, however, was about women as leaders:


"There is no doubt about it ― women are definitely leaders.  But they lead differently.  Their goal is not to force people to do anything.  Their goal is to lead people to do what is best for everyone.  They do not function as enemies of a common good.  They do not raise armies.  They do not kill the opposition.  Instead they seek to stop the oppression.  They seek to empower the people they serve.  They arrive at major decisions, not as enemies of the opposition, but as friend to everyone involved" (p. 31).