Naamah and the Ark at Night ~ by Susan Campbell Bartoletti, illustrated by Holly Meade, 2011, children's, 8/10


Naamah is the wife of Noah, and her name means "great singer."  For forty days and forty nights, as the ark tosses on storm-wracked seas, Naamah sings.  She sings to the animals, two by two.  She sings to her husband, her sons, and their wives.  She sings, and they all sleep, finally at peace.  Acclaimed author Susan Campbell Bartoletti’s rhythmic, lyrical text pairs with Caldecott Honor winner Holly Meade’s luminous collage for a cozy, tender lullaby, and an ode to the power of song.

All the Light We Cannot See ~ by Anthony Doerr, 2014, fiction (France)


The paths of a blind French girl and a German boy collide in occupied France as both try to survive the devastation of World War II.  Marie-Laure lives with her father in Paris near the Museum of Natural History, where he works as the master of its thousands of locks.  When she is six, Marie-Laure goes blind and her father builds a perfect miniature of their Paris neighborhood so she can memorize it by touch and navigate her way home.  When she is twelve, the Nazis occupy Paris and father and daughter flee to the walled citadel of Saint-Malo, where Marie-Laure’s reclusive great-uncle lives in a tall house by the sea.  With them they carry what might be the museum’s most valuable and dangerous jewel.  In a mining town in Germany, the orphan Werner grows up with his younger sister, enchanted by a crude radio they find.  Werner becomes an expert at building and fixing these crucial new instruments, a talent that wins him a place at a brutal academy for Hitler Youth, then a special assignment to track the resistance.  More and more aware of the human cost of his intelligence, Werner travels through the heart of the war and, finally, into Saint-Malo, where his story and Marie-Laure’s converge.


Iris Crane’s tranquil life is shattered when a letter summons memories from her bittersweet past:  her first love, her best friend, and the tragedy that changed everything.  Iris, a young Australian nurse, travels to France during World War I to bring home her fifteen-year-old brother, who ran away to enlist.  But in Paris she meets the charismatic Dr. Frances Ivens, who convinces Iris to help establish a field hospital in the old abbey at Royaumont, staffed entirely by women — a decision that will change her life.  Seamlessly interwoven is the story of Grace, Iris’s granddaughter in 1970s Australia.  Together their narratives paint a portrait of the changing role of women in medicine and the powerful legacy of love. 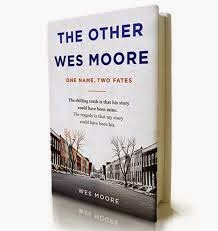 
Two kids named Wes Moore were born blocks apart within a year of each other. Both grew up fatherless in similar Baltimore neighborhoods and had difficult childhoods; both hung out on street corners with their crews; both ran into trouble with the police. How, then, did one grow up to be a Rhodes Scholar, decorated veteran, White House Fellow, and business leader, while the other ended up a convicted murderer serving a life sentence? Wes Moore, the author of this fascinating book, sets out to answer this profound question. In alternating narratives that take readers from heart-wrenching losses to moments of surprising redemption, this book tells the story of a generation of boys trying to find their way in a hostile world. 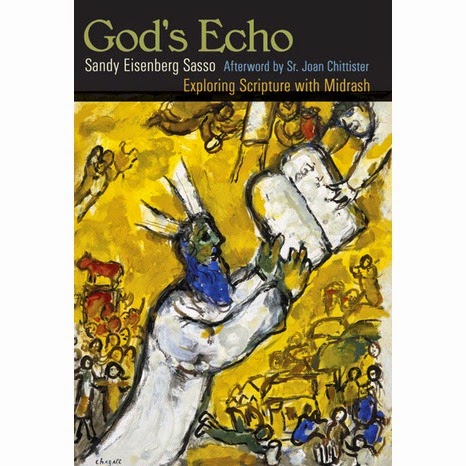 
The Rabbis of old believed that the Torah was divinely revealed and therefore contained eternal, perfect truths and hidden meaning that required elucidation.  The meaning of a text was more complicated than simply reading it.  And meaning changed over time.  This understanding of how the Bible mystically relates to all of life is the fertile ground from which midrash emerged.  "The rabbis believed that nothing in the Bible, not the choice of words or their spellings, not the order of events or the relationship of one text to another, was haphazard or inconsequential.  Everything was there with purpose.  They deemed it their reponsibility to discover connections and harmony where on the surface none appeared to exist.  A text may contain multiple meanings.  Time is of no consequence.  They felt free to read back into old stories what happened in future eras, and to see in the early stories of Genesis a foreshadowing of future events."  In this engaging book, Rabbi Sasso explores how midrash originated, how it is still used today, and offers new translations and interpretations of more than twenty essential midrash texts. 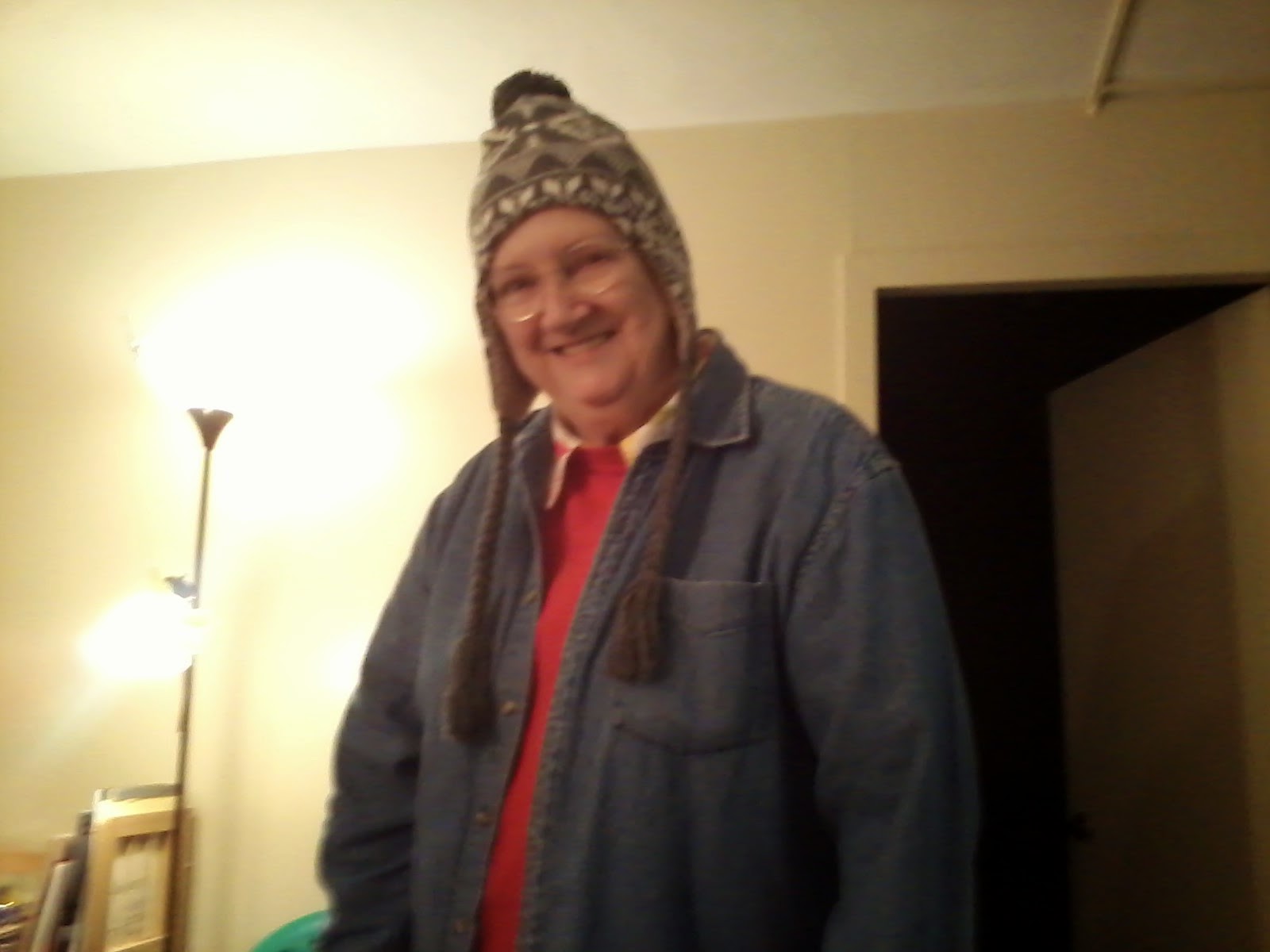 It's been cold in St. Louis!  This is a trapper hat (I didn't know that's what it was called) that I bought to keep my head and ears warm out in the wind that took the wind chill below zero.  I didn't think to wear my new coat, gloves, and scarf (that matches the trapper hat) when I wore the hat down to Donna's apartment, acting silly.  Never have I needed such warmth in Tennessee or Georgia, but I'm learning.  The coat also has a hood, another thing I didn't need on a coat in the South. 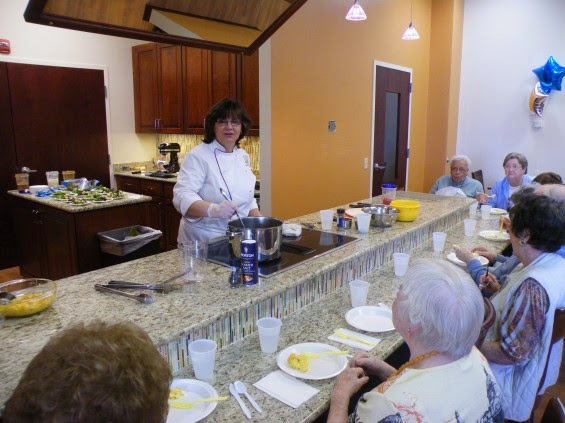 Recently, I was among the "tasters" invited to check out what the new cafe at the Crown Center will serve.  It will be on the ground floor where I live, and "they" say it will open soon.  This demonstration kitchen is also new, in the same room with our free library, where my friend Donna sorted and shelved books so it could re-open.  That's me at the far right, under the blue balloon.  Next to me is my friend Cleo, who took Donna and me to eat at Sweetie Pie's, a restaurant recommended by someone in my Sunday school class (I think it was) even before I moved to St. Louis. 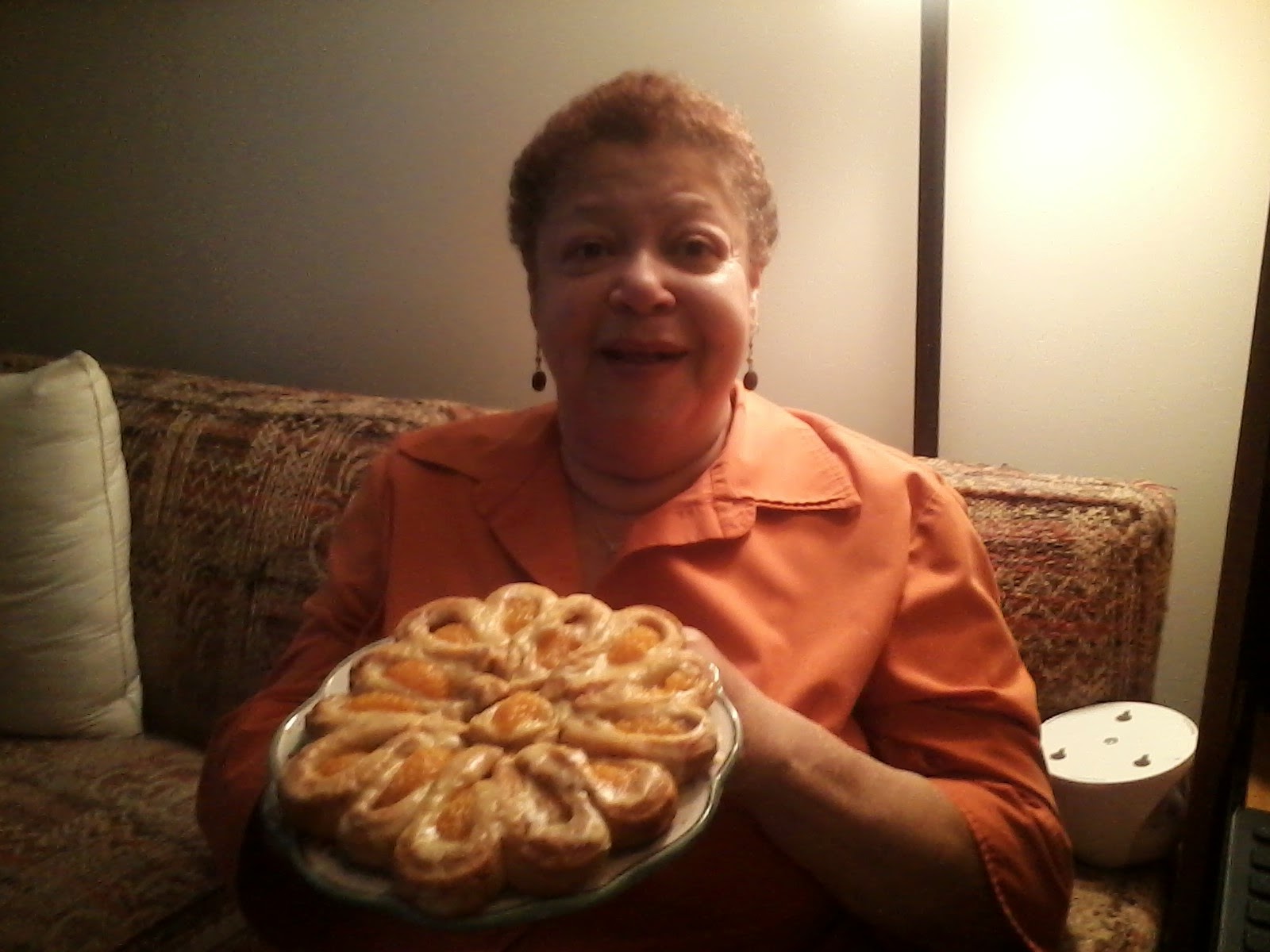 Speaking of food, I taught Varvacille how to make my "famous" orange danish daisy, and she brought her first solo endeavor to our book discussion at Evelyn's apartment in mid-December. 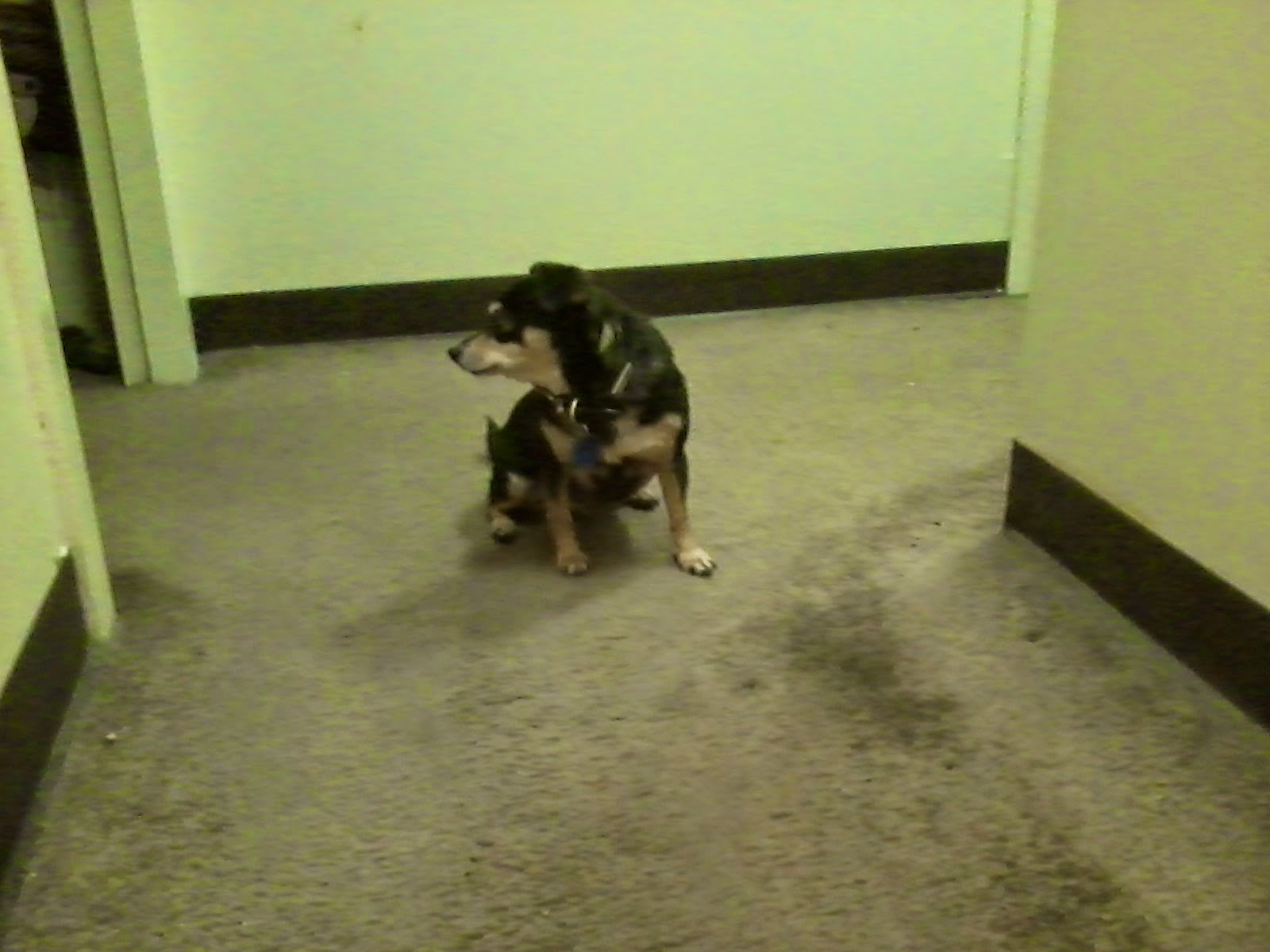 And finally, here's Sherry.  I was among those who fed and talked to Sherry while Pat, her human, has been in the hospital and rehab for weeks.  When I'd walk her through the lobby, people would say, "Hello, Sherry!"  And she would go running to get petted.  Everyone here seems to know her.  She was absolutely miserable all alone in the apartment, and she would run like crazy to the elevator, trying to drag me on the leash behind her.

Bloggers gather in the Sunday Salon — at separate computers in different time zones — to talk about our lives and our reading.
Posted by Bonnie Jacobs on 1/11/2015 08:00:00 PM
Labels: Crown Center, salon

Ahh, I see a pair of books I've read. The Other Wes Moore is very good. A few years ago it was out local public library's Everybody Reads selection. Here's a link to my review:
https://maphead.wordpress.com/2011/05/15/wes-moore-on-wes-moore-3/
As for the Midrash book, I had to go all the way back to my early blogging days of 2008. Here's a link to my old VOX blog that I later imported into my current Wordpress format:
https://maphead.wordpress.com/2008/08/30/people-of-the-book/