One book leads to three, which leads to five 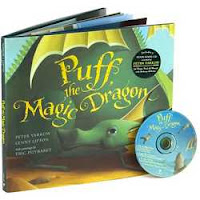 Once upon a time a great-grandmother, once known as the Book Grandma, went shopping for a book to give her great-grandson for his second birthday.  She found Puff, remembered from her own children's childhood.

In the way of things, however, one book was not enough.  The woman was a reader, which is why she was shopping in a bookstore for the third generation of her offspring.  She read to her children and she read to her grandchildren, including one granddaughter (about four at the time) who said about her upcoming birthday gift, "But not a book, Grandma, okay?"  That proves the woman's addiction to books and reading, and thus it should be obvious to anyone who reads a blog about books, the woman could not stop at one.  These four other books also came home with her:

Saving Jesus from Those Who Are Right: Rethinking What It Means to Be Christian ~ by Carter Heyward, 1999


In this theological resource for spiritual transformation and social change, Carter Heyward rethinks the figure and import of Jesus for church, academy, and society.  Rather than focus on the endlessly variable pictures of Jesus in contemporary biblical scholarship, and in radical opposition to the Jesus of the "Christian Right," Heyward presents "Jesus as our brother, infused with a sacred power and passion for embodying right (mutual) relation, and ourselves with him in this commitment."  She goes on "to explore, concretely, how we might live this way."  This Christology offers reconstructions of incarnation, atonement, evil, suffering, and fear.  It also sheds light on the significance of Jesus for ecological, racial, economic, and gender justice.  Heyward's book envisions "a mighty counter-cultural force," which she names christic power, that can help save American culture from its greed and domination and save the figure of Jesus from culture-generated distortions.  In short, Heyward's book will help people come to terms with the life-changing implications of Jesus' person and ethic.

Welcome to the Wisdom of the World and Its Meaning for You: Universal Spiritual Insights Distilled from Five Religious Traditions ~ by Joan Chittister, 2007


The sections on Hindu, Buddhism, Judaism, Christianity, and Islam each have five questions.  These are some of the questions:


What does it mean to "make a difference"??
How do I know the right thing to do?
Where did I lose my idealism?
How will I know the truth when I see it?
Why do I feel that something is missing in my life?

This may sound odd, but I was intrigued by the neat notes in the margins of this "used" book.  I like some of her (his?) comments and wish there was some way to contact this person so we could have a "real" discussion.  Nevertheless, I'll be in dialogue with her/him as I read because of the thoughtful notations.  It's like having two conversation partners, the author and the first reader of the book.

Why Religion Matters: The Fate of the Human Spirit in an Age of Disbelief ~ by Huston Smith, 2001


This one I got for a friend, having read it myself years ago.  Huston Smith says the human spirit is being suffocated by the dominant materialistic worldview of our times.  He champions a society in which religion is once again treasured and authentically practiced as the vital source of human wisdom.  I found a video of Huston Smith speaking about this book at Duke University in 2000, before it was published. 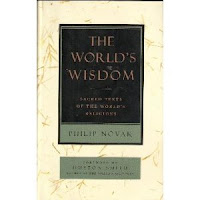 The World's Wisdom: Sacred Texts of the World's Religions ~ by Philip Novak, 1994

A world Bible for our time from Buddhist, Hindu, Confucian, Taoist, Jewish, Christian, Islamic, and primal religion sources.  Novak distills the most powerful and elegant expressions of the wisdom of humankind.


Surely you other readers understand how this sequence of events happened.  And I see I have entirely tipped my hand by saying "I" a few times in telling you about the books.  Oh, well.  Many of you may recognize this bookaholic tendency in yourselves and know this tale, in spite of its "once-upon-a-time" story beginning, most certainly is NOT.....

I totally understand as I did this last night! You've inspired me to blog about it so I will. Hope things are going well with you as we enter this holiday season!

Oh, I wish I'd had a Book Grandma when I was little! Even though I loved to read, I only owned two books until the age of nine when I started earning money working in tobacco fields and was able to buy my own books. I still remember how wonderful it was to be able to buy books for the first time!

Haha...now I have "Puff the Magic Dragon" going through my head. :-)