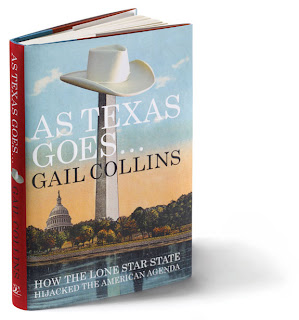 As Texas Goes...: How the Lone Star State Hijacked the American Agenda ~ by Gail Collins, 2012, politics


Gail Collins declares that "what happens in Texas doesn't stay in Texas anymore."   Not until she visited Texas, that proud state of big oil and bigger ambitions, did Gail Collins, the best-selling author and columnist for the New York Times, realize that she had missed the one place that mattered most in America’s political landscape.  Raised in Ohio, Collins had previously seen the American fundamental divide as a war between the Republican heartland and its two liberal coasts.  But the real story, she came to see, was in Texas, where Bush, Cheney, Rove, and Perry had created a conservative political agenda that is now sweeping the country and defining our national identity.  Through its vigorous support of banking deregulation, lax environmental standards, and draconian tax cuts, through its fierce championing of states rights, gun ownership, and, of course, sexual abstinence, Texas, with Governor Rick Perry’s presidential ambitions, has become the bellwether of a far-reaching national movement that continues to have profound social and economic consequences for us all.  Like it or not, as Texas goes, so goes the nation. 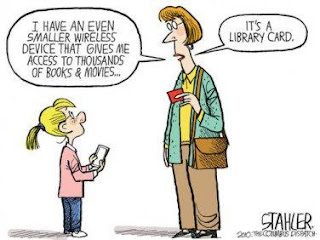 Library Loot is a weekly event co-hosted by Claire @ The Captive Reader and Marg @ The Adventures of an Intrepid Reader that encourages bloggers to share titles of books they’ve checked out of the library.  To participate, just add your post to their Mister Linky any time during the week.  And of course check out what other participants are getting from their libraries this week.
Posted by Bonnie Jacobs on 11/28/2012 12:01:00 AM
Labels: library loot

I also have a copy of "How Texas goes" but I've lost it in the piles that were moved in preparation for the wooden floors to be installed. That seems to be a pattern in my life, right?

Texas has some really scary education reforms and textbooks! I think this book would probably make me mad! :-)

Helen, I've read only about a dozen pages so far, and it has already angered and frustrated me. Here's a sample from page 7: