Dick and Jane ~ and some other girls 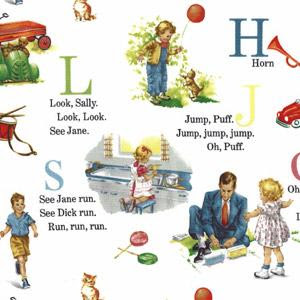 When I was in the first grade in 1946, we used the Dick and Jane readers.  According to Wikipedia, these readers "were used to teach children to read from the 1930s through to the 1970s in the United States. ... The main characters, Dick and Jane, were a little boy and girl. Supporting characters included Baby (or Sally), Mother, Father, Spot the dog, Puff the cat, and Tim the teddy bear."  I remember all but the teddy bear from this list.  And I remember that Dick did all the exciting things, running and playing while Jane watched things happen.  That Wikipedia article says we used "whole language" or "whole word reading" rather than phonics, repeating the words a lot.  That's true, but I remember being fascinated by the sounds (phonics) of the letters.  See the "H" above?  That's a broken ladder (it has only one rung), and it sounds like "huh" with lots of air behind it.  And that "S" is like a snake and sounds like a "hissssssss."

The capital "L" in the illustration reminds me of the only spanking I ever got in school.  (Yes, teachers spanked in those days.)  Being tall, I was on the last row, closest to the reading circle at the back of the class.  While Mrs. Curry was letting the "yellow birds" read, the rest of us (the "blue birds" and "red birds") were supposed to be practicing our writing skills.  Our assigned letter was an "L" but it was the small "l" which is a single line straight down.  Come on, people!  My middle name is Lillian (I once wrote about my middle name) and I could write my whole name before I started to school.  Bo-o-o-oring!  So I listened to the story the "yellow birds" were reading.  It was different from my stories -- and remember, I was on the back row.  So I turned halfway in my desk and listened.  Mrs. Curry told me to turn around and do my work.  I did, but before long I was listening again.  Finally, she called me back and turned me over her lap.  I was so embarrassed!  So embarrassed that at almost 70 years old, I still recall that day in great detail.  Mother says Mrs. Curry called her that evening and asked if I had told her what happened.  Mother said, "No, but she's been trying."  Apparently I said, "Mother ... uh ... um ... oh, nothing," more than once.  And by the way, the "L" sounds like "la, la, lah."

When I was a little older, I devoured books like Abe Lincoln: Pioneer Boy and John Paul Jones: Naval Hero. I wanted to grow up and go to sea on those ships with lots of sails; I wanted to climb the rigging and be high above the ocean. And then I found out that girls can't do that. Women in the 1940s could be WAVES, a women's branch of the Navy, but there were no more sailing ships and, even if there were, women couldn't do the exciting stuff. They were supposed to stay on shore and type. I couldn't have adventures like Dick, and Abe, and John Paul Jones -- and all because I was a girl. That wasn't fair! Boys got to do all the fun stuff.

That is beginning to change.  Books today feature girls being smart and adventurous.

The Report Card by Andrew Clements (2004) is a chapter book about Nora, a girl genius who challenges the over-testing done by elementary schools.  She even speaks up to her teachers, the principal, and her parents as she explains what's wrong with the system.  Rated 9/10.

"I had never had to hide anything out on the soccer field.  I could be as smart and creative and talented as I wanted to -- because nobody ever treats a gifted athlete like she's weird.  And that's not true if you're a gifted student" (p. 83).

Paula Bunyan by Phyllis Root (2009) is a big picture book that lets Paul Bunyan's sister Paula have some tall-tale fun.  Rated 7 of 10. 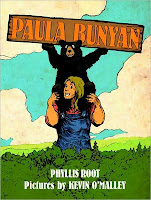 "Three times out of six she could outwrestle Paul, and she always outran him. Paula could run so fast that once when she forgot to do her chores, she ran all the way back to yesterday to finish them and got back to today before anyone noticed she was gone."

I have found a similar book for adults: Feminist Fairy Tales by Barbara G. Walker (1996), who has "rewritten" more than two dozen fairy tales. More later, after I read it.

The Junie B. Jones series of books by Barbara Park were the hottest items we sold in our bookstore, enjoyed by boys as well as girls. Junie B. is definitely not a demure little "Jane" watching the action! Junie B. is the "world's funniest kindergartner." One of these books that comes to mind is Junie B. Jones and Some Sneaky Peeky Spying (1994). Junie B. is not only a good spy -- because she has sneaky feet -- but she is also very opinionated.  Rated 7 of 10.

"I go to kindergarten. Kindergarten is what comes before first grade. Except for I don't know why it's called that silly word of kindergarten. 'Cause it should be called grade zero, I think" (p. 1).

"Art is my favorite ... Only my art didn't get hanged up. 'Cause I painted a horse. And his head turned out like a fat wiener sausage. And so I had to tear it up and stomp on it with my shoes" (p. 63).

Thank You, Amelia Bedelia by Peggy Parish (1964) is one of a series of books about a woman who misunderstands instructions, usually by taking things too literally or getting words mixed up.  She reminds me of Epaminondas and His Auntie (1907) by Sara Cone Bryant, one of my favorite childhood books.  Epaminondas was a boy who took things too literally, just as Amelia Bedelia does.  I rate this Amelia book a 7 of 10.

Told to strip the sheets off the bed, she tears the sheets into strips (p. 13).

Told to string the beans, she gets out needle and thread and hangs the beans on the string (p. 50).

But Amelia Bedelia still manages to make the guest feel right at home. 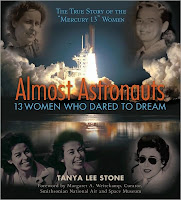 "In a society where women were to have dinner on the table at six p.m. for their husbands returning home from work, it was bad enough that they had the nerve to be women earning a living.  Worse, it was such an unladylike field as aviation.  If they didn't wear skirts while climbing in and out of their cockpits, powder their noses, and freshen their lipstick, they risked jeers and jokes from some of their male peers."

Today girls can dream of actually having all sorts of adventures, even going into outer space. These "almost astronauts" went to Florida to watch the first commander of the space shuttle blast off. They didn't get there, but women are on their way now.
Posted by Bonnie Jacobs on 1/22/2010 11:57:00 PM
Labels: book review, women unbound

You've quite a memory and you took me right along with you...except I never got spanked in school :-)

I missed out on the spanking, too June. In fact I was only spanked once, ever! (when I bit a little boy)

Even though we read the same books at the same time, Bonnie, I somehow never had the idea that a girl couldn't do anything she wanted to. I guess my mother must not have told me! She was the main influence in my life and wanted me to be a scientist.

I remember Dick and Jane (but, like you, not Tim the Teddy Bear). We also had the reading groups divided by birds---I think I was a bluebird. But I got spanked twice! Once, in first grade, for telling a group of kids that there was no Santa Claus and once in fourth grade when the teacher came back to a noisy room and spanked the entire class! I always felt that both spankings were rather unfair and undeserved. :-)

One of the things I loved about reading as a young girl was the biographies about women that my mom would find me at the library. I wish I'd known about the "almost astronauts" then! I only discovered that bit of history in 2008.

Thanks, Alison, I'm happy you want to share it with others.