We Are Our Mothers' Daughters ~ by Cokie Roberts, 1997 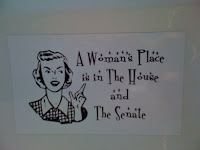 I was hooked by the first sentence:


"'A woman's place is in the house... And in the senate' the T-shirts and buttons proclaim at women's political events."


The first sentence grabbed me because I used to wear this button and probably still have it in my desk drawer. I dealt with many of the things Cokie Roberts writes about in this book, so therefore I became active in the women's movement in the 1970s.  Here's one of the situations that resonated with me (pp. 25-26):


"When my mother [Lindy Boggs] was elected to Congress in 1973, she had just learned firsthand that many widows lost their credit along with their mates.  It was bad enough to lose my father [Hale Boggs], who disappeared in an airplane over Alaska and was never found.  He was Majority Leader of the House of Representatives at the time.  To add insult to sorrow, Mamma found herself dealing with banks and creditors, trying to explain her peculiar situation."


Me, too.  I was divorced in 1973 and suddenly had no credit, even though "we" owned a house.  "He" got the credit WE had paid for.  I had to start from scratch, by getting a Sears Roebuck credit card (I had worked there briefly and they knew me) and asking my pharmacist for credit (he also knew me).  When a law was passed in 1974 making it illegal to deny credit to divorced women while giving it to their former husbands, J. C. Penney's -- which had recently denied me a card -- suddenly decided I could have one after all.  Lindy Boggs, Cokie's mother, served on the Banking and Currency Committee (pp. 26-27):


"It [the Committee] became a perfect place to right the wrongs of the credit discrimination she and friends of hers whose husbands had died or deserted them had experienced.  As my mother tells the story, the committee was considering legislation barring banks from denying anyone a loan because of race, national origin, or creed.  According to Mamma, she snuck into a back room, wrote the words 'or sex or marital status' in longhand into the text of the bill, made copies, and then brought them back to her colleagues, saying in her sweet, southern way, 'I'm sure the omission of women was just an oversight on your part.'  It helps to have a woman in the right place at the right time."


Cokie noticed something interesting when she was covering the Persian Gulf War debate (pp. 62-63):


"Like so many other areas of female endeavor in the last thirty years, we tend to think that the idea of women on the battlefield is something brand-new under the sun.  It's true that the congressional debate on the Persian Gulf War marked the first time I can remember the phrase 'our men and women in the military' used regularly to describe the fighting force.  (As a reporter covering the debate, I was struck by this interesting bit of rhetoric and then I realized that it was also the first time I had regularly heard the term 'our men in the military.'  It had always been 'our boys in Vietnam' or 'our boys in Korea,' leading me to the quite delightful observation that this was not the first time a woman had turned a boy into a man.)"


Just as I noticed a difference in sermons when women started preaching (like one sermon from the book of Exodus about the midwives), it is also true in the field of journalism (pp. 123-124):


"Women journalists write more about women politicians and issues affecting families and children, whether it's about breast cancer research or hardships in child care, or overcrowding in schools."


"The real point here is that we need diversity in newsrooms.  We need people of different ages, races, sexes, and interests so that all kinds of ideas come to the table."


"The advances of women have always advanced men."  That's a quote from Dorothy Height, followed by an example (pp. 134-135) that I remember from when it was in the headlines:


"A prime example:  a case in the Philadelphia post office, where women couldn't lift the heavy bags, so men said they shouldn't have the jobs.  'Men shouldn't have been lifting them either,' she recalls with a laugh, 'they had hernias and all from it.  'We said, "If you can put a man on the moon, there ought to be some way to lift those."  Well, they got ways of electronically doing that.  That advanced it for men.  And I think a lot of men don't understand that.'  There's an understatement." 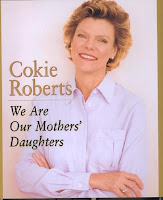 
"No such thing as maternity leave existed."

"[T]here's no such thing as calling in sick on mommyhood."


And my last quote, about something I absolutely hated (p. 147):


"When a children's TV program I was producing was nominated for an Emmy, I received a certificate inscribed with my name.  Instead of the name that appeared on the show's credits, 'Cokie Roberts,' the certificate reads, 'Mrs. Stephen [sic] Roberts.' That, I think, says it all."


Yep, and when I review the book Mrs Man, which is about women taking their husband's names, I'll have a lot more to say on the subject.

My reading progress through this book was slow, but it may have had something to do with taking twelves pages of handwritten notes as I read.  It is also very frustrating to read, but that's the nature of her subject, at least for people who were there and saw the same things she writes about.  So how do I rate the book?  We Are Our Mothers' Daughters gets 8 of 10 from me because it's a very good book.
Posted by Bonnie Jacobs on 12/03/2009 10:24:00 PM
Labels: book review, women unbound

I had no idea that credit used to work like that. Talk about coming a long way.

Like what you do. And my guy is a huge Cokie Fan.

Wow, I didn't know that until very recently about the credit. That's terrifying. Glad that part has been cleared up, but I agree with Bonnie- lots to accomplish yet!

Nicole and Aarti, thanks for your comments. Knowing that I am raising the awareness of younger women makes writing reviews and sharing my life experiences very much worthwhile.