The Complete Persepolis ~ by Marjane Satrapi 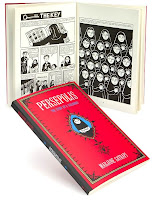 Persepolis: The Story of a Childhood ~ by Marjane Satrapi, 2003

Technically, I read The Complete Persepolis, which is divided into two books. The copyright page shows separate copyrights, so I decided to divide this review into the two books. Marjane grew up confused. When she was ten in 1980, the year after the Islamic revolution in Iran, girls were suddenly required to wear the veil when they didn't have to the day before. Because her parents demonstrated against the new regime, she learned to think for herself and got in trouble for some of the things she said. As a matter of fact, she seemed to always be in trouble. But how could she not think it was right to speak up, when she heard things like this at home (from page 74 of the graphic novel)?


Her mother: "They insulted me. They said that women like me should be pushed up against a wall and f**ked, and then thrown in the garbage."

Her father: "Forget about those morons!! Let's go home..."

Next panel: THAT INCIDENT MADE MY MOTHER SICK FOR SEVERAL DAYS.

Marjane: "Anything I can get you, Mom?"

Next panel: AND SO TO PROTECT WOMEN FROM ALL THE POTENTIAL RAPISTS, THEY DECREED THAT WEARING THE VEIL WAS OBLIGATORY.

Television, bearded man: "Woman's hair emanates rays that excite men. That's why women should cover their hair! If in fact it is really more civilized to go without the veil, then animals are more civilized than we are."

Her father: "Incredible! They think all men are perverts!!"

Marjane: "Of course, because they really are perverts."


The only rapists to fear were the men now making the rules. The family's activism drew attention and so did Marjane's outspoken ways. Finally her parents decided to send Marjane to live in Vienna with her mother's friend.

Marjane didn't stay long with her mother's friend, or with anyone else for that matter. She was an adolescent who had no idea who she was and had a hard time finding out. She tried a lot of things I would not have done, and I wondered as I read about her life if I would have considered doing the same things if I had her background. One part of this section rings true to what I observed, admittedly from afar, about the changes that occurred after the revolution in her country. Her mother, who had come to visit her in Vienna, said:


"I remember the days when we traveled around Europe. It was enough to carry an Iranian passport, they rolled out the red carpet. We were rich before. Now as soon as they learn our nationality, they go through everything, as though we were terrorists. They treat us as though we have the plague."

Marjane was too young to give us an account of the taking American hostages from the U.S. embassy in 1979, a crisis that didn't end until January of 1981. But I think she realized why Westerners no longer trusted Iranians.

This is the first graphic novel I've read, and I can't say I'm particularly impressed with it. I must admit, though, that she managed to get a lot into the book anyway. Nevertheless, I think I prefer more details and getting to know the characters in more depth. Rated: 7 of 10, a good book, but nothing special.
Posted by Bonnie Jacobs on 12/06/2009 08:26:00 PM
Labels: book review, women unbound

I haven't really done graphic novels yet, either, but I've heard a lot about this one, and it's hugely popular for this challenge! I'm sorry you didn't like it, but I think it's a great choice for the challenge. I often wonder how varied backgrounds leads people to make choices.

I loved Persepolis but I get that the graphic novel isn't for everybody. I hope you will check out others though. This format is very diverse. I think the Color Of Earth is a graphic novel you would enjoy. It's a classic, tender story and the artwork is breath-taking. Here's a link to a few images:

I've found another graphic novel I'd like to read, but my library does not (yet?) have it, probably because it isn't due out until January 2012:

Here's what I found on Amazon:

In the tradition of Persepolis and American Born Chinese, a wise and funny high school heroine comes of age. Tina M., sophomore, is a wry and endearing observer of the cliques and mores of Yarborough Academy. (“The name makes it sound fancier than all the public schools in the area. You’d really think the Prince of Wales attended.”) And of the foibles of her Southern California intellectual Indian family. (“Just so you know, my parents have never tried to lock me into a child marriage.”) She’s on a first-name basis with Jean-Paul Sartre, the result of an English honors class assignment to keep an “existential diary.” Keshni Kashyap’s smart and funny graphic novel packs in (existential) high school drama — from Tina’s getting dumped by her smart-girl ally to a kiss on the mouth (Tina’s mouth, but not technically her first kiss) from a cute skateboarder, Neil Strumminger. And it memorably answers the pressing question: Can an English honors assignment be one fifteen-year-old girl’s path to enlightenment?