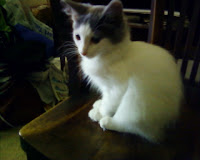 This cute-as-the-dickens kitten was hiding from the rain under my roommate's car when she went out yesterday morning. Needing to get to church to teach a children's Sunday school class, she brought him to me. What could I do? I left a cellphone message that I'd miss church with family, but would meet them for lunch afterwards. In the meantime, this little dickens was exploring his new digs (interesting word) and thus totally annoying the two elderly cats who live here: Sammy, who is 13, and Kiki, who is 8 years old. You should have heard the deep-throat growling and spitting that went on! Sammy hid under Donna's bed, snarling whenever the little fuzzball appeared on her radar, but Kiki defended her turf, actively growling her "ERRRRMMM-mmmmm" whenever the hyperactive youngster cavorted too near the corner where she had retreated.

Surprisingly, this tiny fellow wasn't taking any guff from the big cats and would hiss right back at them. Once, having run from Kiki's hissey fit of snarling and spitting, he jumped into the litter box in the laundry room and said what I can only translate as "nyah-nyah-nyah-nyah-NYAH-nyah ... hisssss!" Then he pooped, covered it with sandy litter, and pranced right back into the living room where Kiki sat, quivering with righteous indignation that we humans had allowed this ... this ... strutting white ball of fluff into HER home. 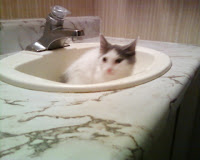 I left the kitten closed up in the bathroom with a bowl of water and went out for lunch and an afternoon of swimming with my daughters and Cady and her mom's friend Laura. When I returned late in the day, Sammy was still under the bed and Kiki looked frazzled from listening to hours of "mew-mew-meow" emanating from the other side of that door. When I released the captive kitty, I found that everything on the counter had been knocked aside and dusty paw prints decorated the sink. (Had he first conquered any dust bunnies hiding behind the toilet bowl?)

To make a long story short(er), I must say it's been an interesting 24 hours. I was awakened at 7:30 this morning by the new cat (yes, this kitten does look like he could be related to Nucat, doesn't he?), who was ardently waging a battle against my elbow with his needle-sharp claws and teeth.

I have printed out these photos of the little dickens who has already captured our hearts and have added this caption: "Did you lose your friend? Found under car in parking lot on Sunday. To claim this cute-as-the-dickens feline, call Bonnie (phone number)." But I haven't yet taken his wanted poster to the mailboxes at the entrance to the apartment complex because I'm afraid someone will claim him.

By the way, can any of you figure out what we've named him? (Naming him means we've capitulated to the lure of his compelling cuteness and may have to keep him, right? I was afraid of that.)
Posted by Bonnie Jacobs on 7/14/2008 02:28:00 PM
Labels: Cady, cats, Dickens, Donna, family, Kiki

Awww...I don't blame you for wanting to keep him, Bonnie. He is adorable. Although I do feel sorry for Sammy and Kiki...

Would his new name be "Dickens" by any chance? :-)

Beth, how the dickens did you guess his name? LOL.

Oh my! What a cutie!

I got Maddie in very much the same way. She came up to me one night when I arrived at work and stuck around all night and by the end of my shift, I'd already named her.

I hope you get to keep him!

I'm guessing "Dickens". Oh, yes, I see I'm correct. He's a cutie. I've just passed up new kittens, this week. One of kiddo's lifeguard buddies found three on his church parking lot and was looking for homes for two of them. I said I thought the old girl (our Miss Spooky) probably deserves a few years without having to worry about a new furball to hiss at. Good news that Dickens used the litterbox!