"What’s the first book that you ever read more than once? (I’m assuming there’s at least one.)  What book have you read the most times?  And — how many?" 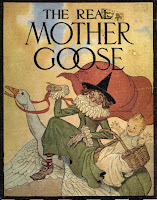 I'm quite sure the FIRST book I read more than once was a Mother Goose or nursery rhyme book.  Or maybe that's technically the first one I requested that my parents read to me over and over and over again.

Even after I started reading for myself, surely the FIRST book I repeated would be inconsequential to us now.  That would have been at least 65 years ago, since I'm 71, and who cares which book was first?

Since I don't count how often I read books, I'll tell you the titles of a couple of books I consider worth reading more than once — or at least once, if you haven't yet read these.

Herland ~ by Charlotte Perkins Gilman (1915) is one I re-read about every ten years.


This utopian novel describes an isolated society composed entirely of women who reproduce via parthenogenesis (asexual reproduction).  The result is an ideal social order, free of war, conflict, and domination.

Time and Again ~ by Jack Finney (1970) is my favorite time travel story.


"Sleep. And when you awake everything you know of the twentieth century will be gone from your mind.  Tonight is January 21, 1882.  There are no such things as automobiles, no planes, computers, television.  'Nuclear' appears in no dictionary.  You have never heard the name Richard Nixon."  Did illustrator Si Morley really step out of his twentieth-century apartment one night — right into the winter of 1882?  The U.S. Government believed it, especially when Si returned with a portfolio of brand-new sketches and tintype photos of a world that no longer existed — or did it?

I used to read Mother Goose to my kids and remember reading it as a kid as well.

I have also read that Mother Goose book over and over to my daughter.

I still need to read these two books, thanks for recommending them. Here is my BTT.