Two books ~ could it happen again? 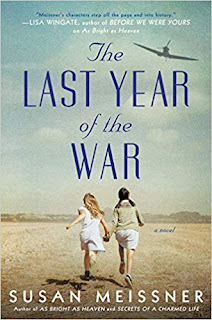 
A German American teenager's life changes forever when her immigrant family is sent to an internment camp during World War II.  Elise Sontag is a typical Iowa fourteen-year-old in 1943 — aware of the war, but distanced from its reach.  Then her father, a legal U.S. resident for nearly two decades, is suddenly arrested on suspicion of being a Nazi sympathizer.  The family is sent to an internment camp in Texas, where, behind the armed guards and barbed wire, Elise feels stripped of everything beloved and familiar, including her own identity.  The only thing that makes the camp bearable is meeting fellow internee Mariko Inoue, a Japanese-American teen from Los Angeles, whose friendship empowers Elise to believe the life she knew before the war will again be hers.

Together in the desert wilderness, Elise and Mariko hold tight the dream of being young American women with a future beyond the fences.  But when the Sontag family is exchanged for American prisoners behind enemy lines in Germany, Elise will face head-on the person the war desires to make of her.  In that devastating crucible she must discover if she has the will to rise above prejudice and hatred and re-claim her own destiny, or disappear into the image others have cast upon her. 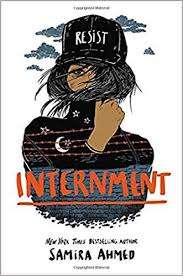 
Set in a horrifying near-future United States, seventeen-year-old Layla Amin and her parents are forced into an internment camp for Muslim American citizens.  With the help of newly made friends also trapped within the internment camp, her boyfriend on the outside, and an unexpected alliance, Layla begins a journey to fight for freedom, leading a revolution against the internment camp's Director and his guards.  Heart-racing and emotional, this novel challenges readers to fight complicit silence that exists in our society today.

Could it happen again?
I have both of these book checked out of my library right now, and it's interesting how possible it seems that our country may do this again.  Force certain people into internment camps, that is.  Here's a good article about the Japanese internment during World War Two, for which National Geographic will require you to sign up to accept emails before they'll let you read it.  It has a map showing ten camps where people of Japanese ancestry were incarcerated, mostly in California.

I read Internment and liked it a lot. I hope you enjoy both of these as they both sound really good.

I think I learned about Internment from reading your review of it. Thanks, Helen. I look forward to reading it.