13 things on my mind today 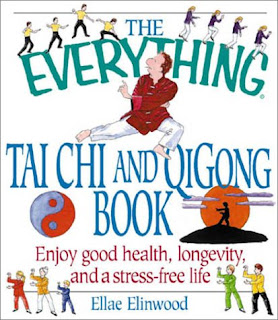 
I found a copy of this book in our small Crown Center library, though neither Donna nor I had shelved it.  It was apparently donated by someone, who actually put it on the right shelf.  But it's in such bad shape that I decided to buy myself a copy.  However, a reviewer on Amazon.com claiming to be "a long time instructor of Tai Chi and Qigong" was disappointed in it and suggested Qigong for Health and Vitality by Michael Tse instead.  Now I'll research that book.

2.  I need to memorize these four ways to be active, or four categories of exercising:
3.  Last week, I took Evelyn to celebrate her birthday at Red Lobster.  We'd finished eating and I'd already paid.  We were still sitting there talking, when Evelyn turned suddenly to look at her oxygen tank.  It was no longer hissing, and she was out of oxygen!  We left immediately and I drove about ten mph over the speed limit, thinking if a policeman stops us, I'd ask him to follow us to Crown Center where he could give me a ticket if he wanted to, but she needed oxygen now!  I got a long-distance call on my phone as we were flying along the streets, but I don't take calls while driving.  I got her home without too much delay and walked her in the door close to where she leaves her motorized scooter.  I dashed back to park my car, but Evelyn didn't come to the door when I reached her floor a few minutes later.  I called the office and someone was rushing up there with a key, when Evelyn backed her scooter out of the elevator on her floor.  She'd had to stop at the ladies' room on the first floor, and that's how I missed her.  I called the office and reached the person coming with the key that was no longer needed.  That's one day I don't want to go through again! 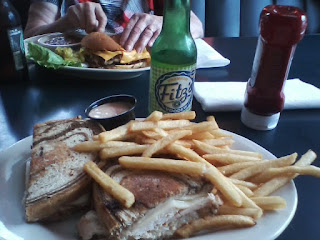 4.  Some of us are trying to eat healthier meals.  One of the things to keep in mind when eating out is "portion distortion," so it's better to eat half and get a to-go box for the rest.  Sheila cut her burger in half when we had lunch today at Fitz's, but my turkey reuben was already cut (foreground).  So was Donna's turkey club (below).  We each took home half for another whole meal. 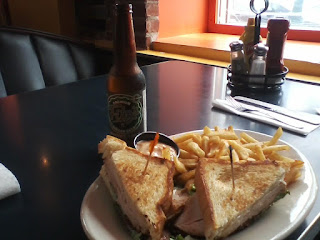 Okay, we do know the fries aren't healthy eating, but we plan to do better, starting tomorrow ... no, really!  See #5.

5.  Four of us met in the Circle@Crown Café at noon to plan DASH Diet meals together.  How will this work?  Dunno.  That's what we hope to figure out.  We have three DASH Diet books among us so far, with another one ordered ― one with menus. 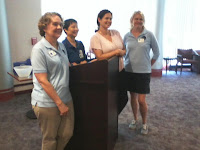 6.  Last week, I attended a class on fluids and staying hydrated.  This photo shows the Oasis people who lead the group discussion and actually got us on our feet to exercise.  We talked about the importance of not getting dehydrated.

7.  A clergywoman says Doris Kearns Goodwin’s Team of Rivals should be required reading in seminaries.  Why?  It's about encouraging and praising one another, something we should all do.

8.  I enjoy reading about quantum physics, as in this article:  New Quantum Theory Could Explain the Flow of Time.  My undergraduate degree was a double major, in Philosophy and Religion and in English Language and Literature.  My senior paper looked at the flow of time, noting that even in speculative fiction about time travel, the direction of time's flow is still the same.  I couldn't find an example of a story where time flowed backwards, so I wrote a short story about it myself.  That shows my interest in the concept goes back 50 years or so.  Now I read about quantum mechanics and string theory and quantum entanglement.  You know, fun stuff!

9.  Nobody else in my circle seems particularly interested in physics, but I got a surprise recently when Diane overheard something I said in the dining room and we got to talking about her interest in the same subject.  I sent her an email linking to things I've written on this blog about physics:

"In my other hand is a paper on quantum physics, which Ginnie and I were reading because we are both nerds."

10.  I was surprised when Diane wrote back saying "your writing is so engaging."  It's been decades since anyone said such a thing to me, maybe because I've been a published writer for so many decades and have taught writing at the college level.  I wrote for my college newspaper and yearbook, did book reviews for the local paper, had my first articles published nationally in the mid-1960s, and even had two or three articles translated into foreign languages along the way.  Oh, yeah, I also was the editor of two in-house publications.  Diane doesn't know about any of that. 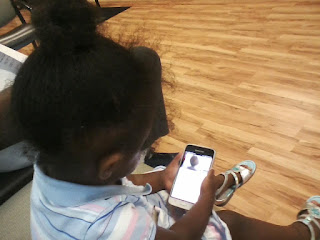 11.  This little girl, age two, talked to me today while I waited for my friend Barbara at her doctor's office.  She was very friendly, vivacious, and full of life ― and told me all about the videos she was watching and about her doll that she had me hold while she was busy with this gadget.  She was so precocious.  Her grandparents gave me permission to use this non-identifying photo.

12.  Clawdia is currently asleep beside me, but it's gotten too dark to get a photo of her.  It's been a long, long day.

13.  A recent Quote of the Day ― a feature that appears daily on this blog's sidebar ― was from John Dryden, who said, "Words are but pictures of our thoughts."  I'm a word person, so this resonates with me.

The only rule for Thursday Thirteen is to write about 13 things.  The New Thursday 13 is hosted by Country Dew @ Blue Country Magic and Colleen @ Loose Leaf Notes.  If you want to read lists by other people or play along yourself, here's the linky for this week.
Posted by Bonnie Jacobs on 6/29/2017 08:30:00 PM
Labels: DASH diet, Diane, Donna, Evelyn, Sheila, Thursday Thirteen

Oh my goodness, you've been busy, both physically and mentally! What a scary incident with your friend and her oxygen. I am ramping up the training for the AVON breast cancer walk that I am doing in September and it is helping to do it with friends. Our training officially started 2 weeks ago, just as I went on vacation (good timing, right?). Luckily we did a lot of walking in the UK.