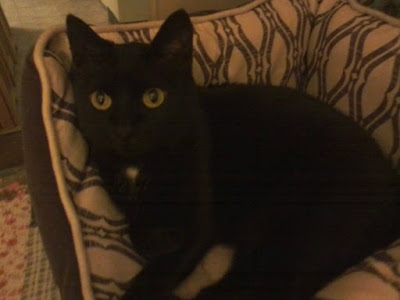 Can a cat just pretend to be caterwauling?  I'm afraid I'd be in even more trouble if I really did it.  I'm having to type this up in the middle of the night because Bonnie is angry at me.  It's like this ... we were visiting Tiny.  I could hear her television and knew she was in there, and I wouldn't move from her door until Bonnie knocked on it.  Tomoko was also there, and she and Tiny were watching a movie.  I got treats from both of them.  But when Bonnie thought I was ready to go, I ran in Tiny's bedroom to hide.

Bonnie called, she threatened to leave me there, she DID leave me there (though later I heard her tell Tiny and Tomoko she waited those five minutes in the hallway), and still I did not come out of hiding.  When she came back inside Tiny's apartment, Bonnie said we would never come visit again if I didn't come out NOW.  I didn't come out because I was sure she wouldn't do that to me.  But then Bonnie got down on the floor and looked under the bed.  Even Tiny, who has back problems, got down to look under the bed.  So I meowed and inched my way out of a corner of the closet where I was hiding.  When Bonnie reached for me, though, I really DID run under the bed.  Not very far, and she could reach me.  Which she did.  And she pulled me out, saying, "You're in BIG trouble now!"  She's never said that to me before.  I think I really am in big trouble because Bonnie wouldn't put me down, and I do NOT like being held or carried.

After we were out in the hall, Bonnie let me jump out of her arms.  But she kept saying I was a "bad girl" and shooed me into our apartment.  When she went to bed, I jumped up beside her as usual, but Bonnie didn't pet me or coo at me like she usually does.  I curled up against her, and she didn't cuddle.  She never said a word.  It just FEELS like she's angry at me.  Well, I mean, she even said it.

Today, I ran across email from Sasha to Clawdia and her reply back.

Sasha: Oh Clawdia. I am so 😐. Sandy has gotten angry at me in the past. I know that awful feeling like "will they ever forgive me". But their love for us prevails. She'll come around and all will b back to normal. In the meantime, my thoughts and prayers are with u. Also, I hope we can actually meet one day. Even though I am kind of shy.
Love Sasha

Clawdia: Hi Sasha! I'm not shy! I'll come visit you! When? Now?!? I have human friends here, but no cat friends so far! Hmm, I wonder if Bonnie will come with me to push the elevator buttons? I'll bring you some of my treats. Oh, wait! I think I'm running low on treats. Bonnie won't let me have as many as I want, so we must be about to run out of treats, right?
Love, Clawdia >^..^<

Ah, our animals.... They never cease to amuse us and frustrate us! As Charlie loses his hearing I have to remember to get really close to him to let him know what's going on.