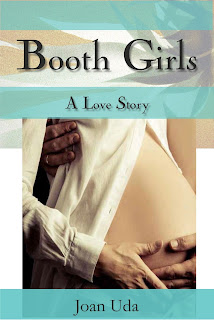 
From the author's web site:  A very pregnant Mary, a graduate student at the University of Iowa, refuses to marry her live-in lover Kenny, a physics whiz, because she has career plans of her own.  Mary is a graduate student in Victorian literature and plans to build a career in that field, at a time when few women have successful careers and most women have difficulty being admitted to professional and most graduate schools.

Mary believes in herself, and is undaunted by her pregnancy, but she also loves Kenny, with whom she’s lived while she’s been in school for three years.  Kenny tells her repeatedly that he wants to marry her, but Mary knows that he is not faithful to her, though he almost always comes home sometime before dawn.  When Mary discovers that one of Kenny’s lovers is her best friend Callie, she decides to go to Booth Memorial Hospital, a home for unwed mothers, to have her baby there and give it up for adoption.

Kenny was reared by his mother to be a gentleman.  But he is furious with Mary for wanting to give away their baby.  He says she can give the child to him to rear, but Mary refuses.  She knows that in 1954 there is no available test that will prove his paternity, that therefore he has no rights where this child is concerned, and so she can do as she thinks best.  Kenny drives Mary to Booth in Des Moines, comes inside, but then takes off abruptly, leaving her behind, unable to contain his anger at what she is doing.

Mary settles in at Booth, meeting the Salvation Army officers who staff the home, and going to work for the hospital nurse who runs the hospital floor where the babies are delivered.  Mary makes new friends at Booth, including Dee, a black girl from Des Moines who is bent upon marrying the father of her baby, and Ruby, who is married to a Des Moines mobster with ties into the Chicago mob.  The action unfolds as each of the women works out her own destiny.

The Booth Memorial Homes existed in the United States and England, and possibly in other countries, until the mid-to-late 1970’s.  By then sexual mores had changed sufficiently that most unmarried pregnant woman were no longer expelled from their families or held up as objects of scorn.  But many of us born in the first half of the 20th Century remember vividly how things were back then.  Some of us, including me, even experienced it.  I leave it to the reader to decide which of the characters’ experiences most resemble mine. 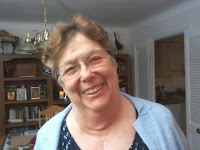 Wow!  Once I started this story, I read straight through, picking it up again after falling asleep in the wee hours of the morning.  That's a 10/10 novel for me, one I couldn't put down until I finished, and even then wanting more, more, more!  Wanting it enough that I called my friend Joan Uda and insisted on reading her second novel, knowing she hasn't finished it yet.  I met Joan last fall, met and got to know her husband Lowell (also a published writer) before he died in December, and have been getting to know Joan ever since.  I know she has several published nonfiction books.  Because of Lowell's illness and death, Joan's writing on her second novel has been stalled.  As a former editor, I want to read her next novel enough that I volunteered to edit it for her!
Posted by Bonnie Jacobs on 6/28/2015 11:00:00 PM
Labels: Joan