Beginning ~ with choosing a name 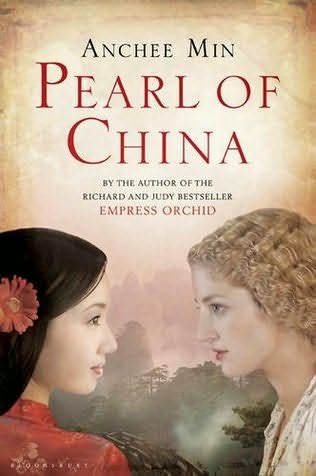 
Before I was Willow, I was Weed.  My grandmother, NaiNai, insisted that naming me Weed was better.  She believed that the gods would have a hard time making my life go lower if I was already at the bottom.  Papa disagreed.  "Men want to marry flowers, not weeds."  They argued and finally settled for Willow, which was considered "gentle enough to weep and tough enough to be made into farming tools."  I always wondered what my mother would have thought if she had lived.

This novel is based on the life of Pearl Buck.  Years ago, I read The Good Earth, which is Pearl Buck's most famous novel.  The last question in a discussion guide says:  "If you have read The Good Earth, discuss similarities and differences between Buck’s novel and Min’s Pearl of China.  How does each author portray the people, land, and troubles of rural China?"  I wonder how different this book will be.  I'm reading it for my book club's first discussion of 2015.  Here's a summary:


It is the end of the nineteenth century and China is riding on the crest of great change, but for nine-year-old Willow, the only child of a destitute family in the small southern town of Chin-kiang, nothing ever seems to change.  Until the day she meets Pearl, the eldest daughter of a zealous American missionary.  Pearl is head-strong, independent and fiercely intelligent, and will grow up to be Pearl S. Buck, the Pulitzer- and Nobel Prize-winning writer and humanitarian activist, but for now all Willow knows is that she has never met anyone like her in all her life.  From the start the two are thick as thieves, but when the Boxer Rebellion rocks the nation, Pearl's family is forced to leave China to flee religious persecution.  As the twentieth century unfolds in all its turmoil, through right-wing military coups and Mao's Red Revolution, through bad marriages and broken dreams, the two girls cling to their lifelong friendship across the sea.  In this ambitious and moving new novel, Anchee Min, acclaimed author of Empress Orchid and Red Azalea, brings to life a courageous and passionate woman who loved the country of her childhood and who has been hailed in China as a modern heroine.

I still haven't read anything by Pearl Buck although her books keep popping up in my life! This sounds like a really interesting read, because the beginning immediately makes you care for Willow! I hope you enjoy it and I'm looking forward to your thoughts on it! Thanks for sharing :) have a good weekend!
My Friday post
Juli @ Universe in Words

Sounds like a novel to really sink your teeth into! I enjoy books about lifelong friendships between women, especially when they're in unfamiliar settings like this one. This sounds like a good story.
My Friday post features VIDAL’S HONOR.

I read and enjoyed The Good Earth in high school and am intrigued by this one. I know very little about Pearl Buck though her books have been on my TBR for awhile. Thanks for sharing!

I think a name is very important.

Thanks so much for sharing. Love the cover too.

Haven't heard of this but it sounds interesting :)

My mother's shelves always carried Pearl Buck's book, but I confess I've never read them This one sounds very interesting. Freindship and new settings/scenery/cultures interest me. This will go on my TRL. Thanks for the introduction to it.