Beginning ~ in a dental class 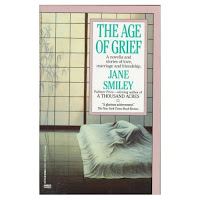 
Dana was the only woman in our freshman dental class, one of two that year in the whole dental school.

I set out to buy this book because I'd just finished reading Lauren F. Winner's Still: Notes on a Mid-Faith Crisis (2012), where she wrote on the first page of her preface:


Smiley is quite possibly my favorite living American novelist — I read her novella "The Age of Grief" at least once annually.

I've read several of Jane Smiley's novels and think she is a great writer.  Her novel A Thousand Acres is a modern version of King Lear by Shakespeare, but I'd never heard of "The Age of Grief."  At the bookstore, I learned it's a novella of just under a hundred pages at the end of this book by the same title, packaged with five short stories.  Since the novella is the whole reason I got the book, its beginning is what I quoted above, rather than the first line of the first short story.  Here's the synopsis of the novella itself:


A man meditates on the vagaries of love and family life.  Certain that his wife has fallen in love with someone else — and been spurned by him — he tries to recover what he calls "the ironic middle," the good-humored, matter-of-fact heart of the marriage where he can keep her from knowing of his own sorrow.

I don't know how the story gets from that opening sentence to the man (apparently the narrator) worried about his wife, but I'm curious now.

I adore Jane Smiley's books, having read A Thousand Acres (and seen the movie countless times)among others; I haven't read this one, though. I need to grab it!

I loved 1,000 acres! It is the book that turned me into a list reader because it made me vow to read all the Pulitzer winners. I also enjoyed Moo and have several others on my TBR shelf that I should turn to.

Thanks for joining in on Book Beginnings. Sorry the post was messed up this morning. I fixed it all, got Mr. Linky up, and added your link.

I have not read anything by Jane Smiley. The story looks interesting.

i've never read any of her books but she sounds like an interesting read. i'd love to hear more about "the ironic middle"!

I'll have to check this out, Bonnie. I read a Jane Smiley book (can't recall the name) years ago and liked her very much. I always meant to read more of her, but somehow did not. This looks like a good one to try.

A happy and blessed Easter to you and those you love, Bonnie!

JC and Beth, since I haven't read this one yet, I can't say whether it's a good place to start. I can, however, highly recommend A Thousand Acres.