Stories about my dad 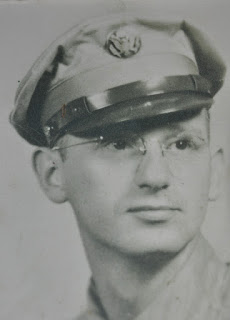 For Christmas 2003, I gave each of my grandchildren a piece of history, a story about their ancestors.  Everyone got a different tale, which meant they would have to share their stories in order to get a fuller picture of the people from their past.  My three grandsons got stories about their great-grandfather William Elmer Setliffe, Jr.  My four granddaughters got stories about their great-grandmother Mildred Inez Reynolds Setliffe, which I'll share next Thursday.


My dad spent a lot of his growing-up years on Main Street [in Chattanooga, Tennessee].  That's where his father, my "pops," had his meat market.  Both my dad and his brother Jeff became meat cutters like their father, and each eventually had his own store or meat market.  Dad opened his grocery store at the corner of Main Street and Central Avenue, only a few blocks from where his father's meat market had been.  The meat counter had a glass front like those in a deli today.  I have a 1942 photo of the store showing Pops on the left (with center counters hiding the fact that he had had one leg amputated), Dad wearing his white apron and leaning an elbow on the back counter where he weighed meat on the big white scales, and two assistants in the back.

I remember living behind our store, and Dad's parents lived there with us.  One morning, Pops was shaving in the bathroom and one button of his long johns was unbuttoned.  I giggled and pointed and sing-songed:  "I see Popsy's hiney!"  My elders enjoyed that story for years.

I remember only a few "important" things about the store, since I was only two when I lived there.  By important things, I mean my job.  I got to arrange the apples in the front window.  My daddy let me stand on a stool and put the apples on the slanted board.  I can also tell you exactly where the cookie bins were ― in the center of the store.  Getting a cookie, either to sell or nibble, meant taking the silver top off the big glass container and reaching in for the cookie you wanted.  The jars were on a lower shelf, exactly at the eye level of a little girl like me.

I told [my son] David, when he was promoted from bag boy to the meat section of Pruett's [grocery store] on Signal Mountain, that he was following in the footsteps of his ancestors.  I could remember seeing my dad with gauze around a thumb because he had chopped meat a bit too close to his own hand.  Once when I was at Pruett's, I saw David behind the counter with his thumb similarly wrapped ― and the bandage was soppy wet.  Until that moment, I had forgotten that Dad's bandage was also usually wet from handling the frozen food.  I was not too happy about that particular connection between my son and my father, but I guess it comes with the territory ― using meat cleavers and sharp knives.  Still, I couldn't resist telling David no one wanted part of his thumb in their meat.

When I began managing the Trenton bookstore in August [of 2003], I felt totally at home.  Recently, it occurred to me that the bookstore is about the size of Dad's meat market and I'm following the family tradition, retailing to customers who prefer small stores.  No wonder I love working there.


My dad had two children and one more on the way in 1944, when World War II was in its next-to-last year.  Being a father had kept him out of the war until then, but in 1944 he was drafted.  He had to leave before Christmas, but Santa was good to us that year and came early so Daddy could enjoy Christmas with us before he left.  I was four years old as I stood on the sofa, waving goodbye to him through the window, and Billy would have been barely two.  Dad was wearing his Army uniform and waved as he walked up the sidewalk.  My little sister, Ann, was born the following March and was several months old before Daddy came home again.

The Army had a funny way of assigning jobs.  Because Dad owned a meat market and grocery store, someone must have thought "food" and decided my daddy should be a cook.  He didn't know how to cook, not at all.  So he wrote home to his wife, my Mama, and asked for her recipes.  Can you imagine taking a recipe to make something for a family of four and multiplying it to feed thousands of men?  That's what he did.  Apparently he did a pretty good job as a cook and came home still cooking "enough to feed an army."  He loved to make chili, but there was always enough to feed the whole neighborhood, literally!  So we would have a block party even before it was called that.  He would use a white coffee cup to ladle out the chili.

It's funny that I miss his chili and wish I could have some now, because I never wanted his chili when I was a child.  It burned my mouth and was too spicy for me.  I guess that's the way the soldiers preferred it, and I would probably like it now.  I wonder if I could find his recipe if I looked through old family papers.  Probably not, because Daddy mostly cooked by dumping in lots of meat and beans and spices and tasting until it was just the way he wanted it.

If he were still alive, I know he'd be sitting around telling you about all his exploits in Japan and in the Philippines.  He would tell you about sailing to the Philippines on the U.S.S. Enterprise, an aircraft carrier.  It was the biggest ship the Navy had at that time, so you could probably find a photo of that ship in a history book or an encyclopedia.  But I've saved you the time by printing out some information I found online for you.  He loved to tell stories, and he would illustrate the letters he sent home to us.  He drew not only things he saw, but cartoons about cows or anything he thought would make us laugh and enjoy his letters. 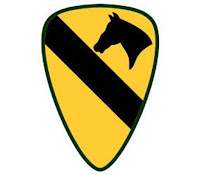 My dad was in the Army during World War II and was sent to Japan near the end of the war.  He was in the First Cavalry [division], which had a yellow patch with a black stripe slanted across it and the head of a horse in the upper part.  It looks like the one at the right side of this paragraph.  One of the funny stories he told was about the Japanese making replacement patches for the Army and making the "horses" with long ears.  They were making jackasses out of the First Cavalry!

My dad liked to tell stories and make people laugh, so I'm never quite sure whether a story was true or was "elaborated."  Even though Dad was a cook, he also drove big trucks and (according to him) led convoys of trucks because of his good sense of direction.  The soldiers, after all, couldn't read Japanese road signs.  When we children would ask him to tell us about the war, he said he had "captured two Japs."  Then he would tell the truth about that capture:

One night he was writing a letter to Mama (and us kids) and heard footsteps in the gravel outside his tent.  When he went silently to investigate, he found two Japs (what we called the Japanese people during the war).  The two were trying to steal food, and Daddy was the cook.  He grabbed both of them without having to fire a shot.  Only at the end of the story did Daddy admit the two he "captured" were children.  Although he didn't say so, I can only imagine my child-loving daddy fed those hungry kids before he turned them in.

In another story Daddy told us about hearing piano music coming from a Japanese house he was walking past.  He stopped and tried to tell the owner he wanted to listen.  The man, however, thought Dad wanted his daughter, who was playing the piano.  So he got very angry and ran Dad off, even though he simply wanted to listen to the music.  Back home in Chattanooga, as Daddy knew, I was learning to play the big upright piano in the living room.  All he wanted was to think about music and his family.  My dad was a family man who loved his children.  He was missing us when he heard the piano inside that house.

What a wonderful gift for your family. Those stories are so important for people to hear!