No One Ever Asked ~ by Katie Ganshert 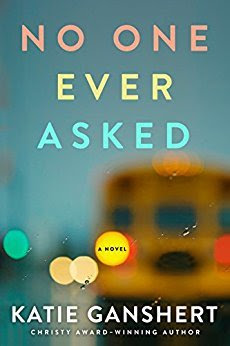 
When an impoverished school district loses its accreditation and the affluent community of Crystal Ridge has no choice but to open their school doors, the lives of three very different women converge:  Camille Gray, Jen Covington, and Anaya Jones.

I told you about them when I first got this book.  As I read the book, my focus began to center most on what was happening to Anaya, a recent graduate from college who was going into her first year of teaching.  She feels out of place from the beginning.  Her name is mangled by strangers, like when she meets her new school's principal.

Names fascinate me.  Hers is part of the story, though I was two-thirds of the way through the book before I learned this:

Anaya was my favorite character.  I was intrigued by the way she set up her classroom and engaged her second-grade students and how she felt about helping out in her own neighborhood:


"When she volunteered at the youth center, she wasn't an outsider.  She didn't have to function on two different levels like she did at O'Hare, where she wasn't just a new teacher learning the ropes but the black new teacher from South Fork, constantly aware of how she was being perceived.  It was exhausting" (p. 195).

Anaya is from the nearby school district that has lost its accreditation, teaching in the affluent district where students from her neighborhood were now being bussed.  She made it, but what about the other students still in her old high school?


"It wasn't fair.  A mother shouldn't have to feel the desperation that came when her bright child was stuck in a school that offered zero college prep classes.  A school that had over-crowded classrooms and underpaid teachers, many of whom were subs, because subs didn't require health insurance.  A school that might as well be a pipeline to the Missouri prison system, especially for boys without fathers.  Boys like Darius" (p. 53).

Darius is Anaya's younger brother, still in high school.  The situation the author has thrown these characters into seems especially vivid to me, maybe because I moved to St. Louis in 2014, just two months before Michael Brown was killed in Ferguson, a suburb about seven miles from me.  In the Author's Note at the end of the book, Katie Ganshert tells us about...


"...an integration story that happened in the Saint Louis area in 2013.  Normandy and Riverview Gardens, two school districts composed almost entirely of black and brown students, lost their accreditation.  Both districts were severely underresourced and understaffed and had a high concentration of students from poverty.  The loss of accreditation triggered a Missouri transfer law that gave any student at a failing district the option of transferring elsewhere.  The failing school was not only responsible for transfer tuition; they had to provide transportation as well.  Normandy chose to bus students to Francis Howell, a mostly white, affluent district in a neighboring county" (p. 361). 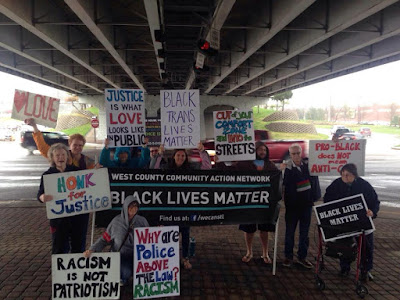 Do I recommend this book?  Oh, yeah!  I gave it "only" a 9.5 out of ten because it was confusing to keep up with three main characters and their friends and families (using "Jen" and "Jan" names, for example).  I especially recommend it to my friend Joy, who regularly stands holding her "LOVE" sign with this group on Saturdays and attends school board meetings to help change that "school to prison pipeline" situation.  Thanks, Joy, for all you do.
Posted by Bonnie Jacobs on 5/30/2018 04:00:00 PM
Labels: book review

Great find, Bonnie! I didn't know about this one. I can't wait to read it!

We had this happen to one school in our district years ago. When they got the failing grade under No Child Left Behind, all the white students left for other schools and all the Latino students stayed. 10 years on and it's the same as a school half the size of the others and 98% Latino. But, it is an amazing school now!