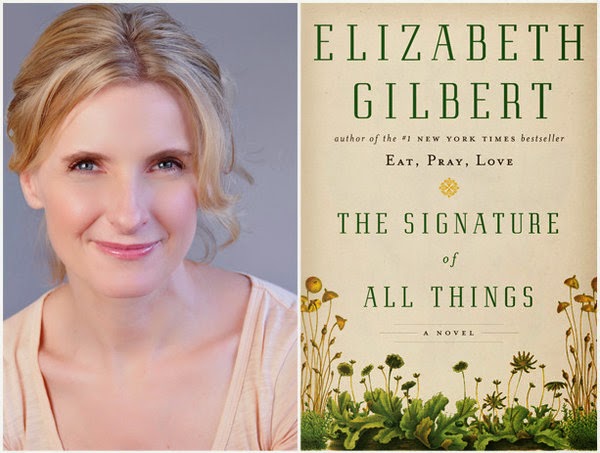 The Signature of All Things ~ by Elizabeth Gilbert, 2013, fiction


Alma Whittaker, born with the century, slid into our world on the fifth of January, 1800.  Swiftly — nearly immediately — opinions began to form around her.  Alma's mother, upon viewing the infant for the first time, felt quite satisfied with the outcome.

I'm reading this one with the book club formed by readers at my church.  Here's the story line:


Spanning much of the eighteenth and nineteenth centuries, the novel follows the fortunes of the extraordinary Whittaker family as led by the enterprising Henry Whittaker — a poor-born Englishman who makes a great fortune in the South American quinine trade, eventually becoming the richest man in Philadelphia.  Henry’s brilliant daughter Alma, who inherits both her father’s money and his mind, ultimately becomes a botanist of considerable gifts herself.  As Alma’s research takes her deeper into the mysteries of evolution, she falls in love with a man named Ambrose Pike who makes incomparable paintings of orchids and who draws her in the exact opposite direction — into the realm of the spiritual, the divine, and the magical.  Alma is a clear-minded scientist; Ambrose a utopian artist — but what unites this unlikely couple is a desperate need to understand the workings of this world and the mechanisms behind all life.  This novel soars across the globe — from London to Peru to Philadelphia to Tahiti to Amsterdam, and beyond.  Along the way, the story is peopled with unforgettable characters:  missionaries, abolitionists, adventurers, astronomers, sea captains, geniuses, and the quite mad.  But most memorable of all, it is the story of Alma Whittaker, who — born in the Age of Enlightenment, but living well into the Industrial Revolution — bears witness to that extraordinary moment in human history when all the old assumptions about science, religion, commerce, and class were exploding into dangerous new ideas.

Oh this is on my TBR! It looks really interesting. Hope you're enjoying it!