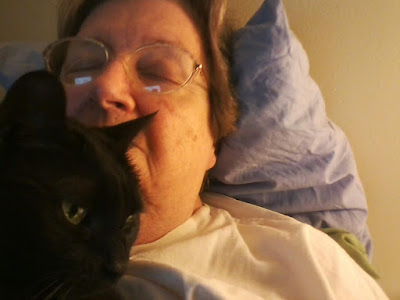 Clawdia moved in with me exactly two years today.  She was scared and scrawny, as I mentioned last year.  This photo proves she has taken over.  Tonight, I was stretched out on my bed tapping away on my laptop, when she decided I wasn't paying attention to her and remedied that by stretching across me, positioning herself between me and the offending machine that took my attention away from her.  She wanted to go for another walk in the hallway, and I kept telling her we'd already been and I wasn't going again tonight.  Didn't matter; she wants what she wants!


"That was my place for hiding books."  "Why did you need to hide them?  Did your parents disapprove of your reading?"  "Oma did not like it.  My grandmother," she explained ... "She would hide my books if she found them lying about, so I hid them from her.  Oma thought reading another word for idleness.  I was going to the lake to read when the warriors found me" (loc. 778).

Bloggers gather in the Sunday Salon — at separate computers in different time zones — to talk about our lives and our reading.
Posted by Bonnie Jacobs on 7/23/2017 11:57:00 PM
Labels: Clawdia, salon

Clawdia has been a wonderful addition, I'm sure. She sounds like my poodle, Charlie, who gets up in the night to go out. He wins every time.